Bell Island is an island located off the Avalon Peninsula of Newfoundland and Labrador, Canada in Conception Bay. Measuring 9.7 kilometres (6.0 mi) in length and 3.5 kilometres (2.2 mi) in width, it has an area of 34 square kilometres (8,400 acres). The subsurface is composed of Ordovician sandstone and shale with red hematite. It was once the site of large iron ore mines.

It is home to three communities, the largest of which is the incorporated town of Wabana. The provincial government operates a ferry service from Portugal Cove–St. Philip's to Bell Island daily using either the MV Flanders or the MV Legionnaire. It is primarily used by commuters who work in the St. John's metropolitan area. 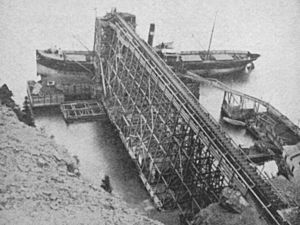 Probably settled by Maritime Archaic and/or Dorset people, Bell Island, as with the rest of the island of Newfoundland, was probably inhabited by the Beothuk Nation at the time of European discovery.

The first European inhabitants settled during the 18th century and attempted to farm and fish, with the island having a subsistence economy throughout much of the 19th century. The first recorded settler was an Englishman, Gregory Normore, in 1740.

The economy expanded tremendously during the 1890s when iron ore mining began near the community of Wabana.

Wabana grew to become the island's largest community and the mine became one of the largest producers of iron ore in northeastern North America. The mine's workings extended beneath the seabed of Conception Bay, creating one of the most extensive submarine iron mines in the world.

Most of Bell Island's ore was shipped from loading facilities to Sydney, Nova Scotia where it was smelted in a steel mill. The steel mill at Sydney and the iron mine at Bell Island were owned by the Dominion Steel and Coal Company (DOSCO), which at one point was one of the largest private employers in Canada.

Two QF 4.7-inch B Mark IV* guns were emplaced on Bell Island early in World War II. They can still be seen on their mountings.

During the Second World War, the anchorage for bulk carriers shipping iron ore was attacked by German U-boats in two attacks on 5 September and 2 November 1942, by U-513 and U-518. Four ships were sunk and 70 merchant mariners lost their lives:

In addition to the four cargo ships, an errant German torpedo also struck the DOSCO iron ore loading dock on shore. A memorial overlooks the waters at Lance Cove where the wrecks lie just a few hundred yards offshore. Bell Island was one of the very few locations in North America to see enemy action during the war, and the only location in North America to be subject to direct attack by German forces during World War II (due to the errant torpedo hitting land).

Closure of iron ore mine

Being an underground operation, the Bell Island iron ore mine was extremely expensive to operate. During the 1950s, some of the largest surface iron ore deposits in the world were discovered in northeastern Quebec and the western part of Labrador. After the Quebec North Shore and Labrador Railway was built in the latter part of the decade, Bell Island iron ore became uncompetitive. 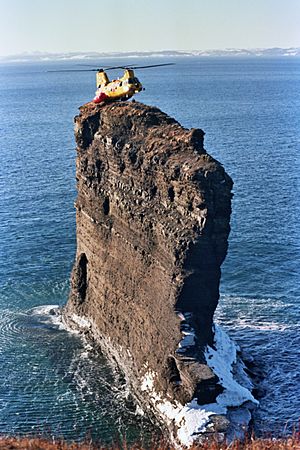 A Canadian Forces Labrador helicopter landing on "The Clapper", a sea stack off the tip of Bell Island, in 1987.[needs context]

During the early 1960s, the steel and coal industries on Cape Breton Island began to falter in the face of foreign competition. In 1966 the steel mill in Sydney and nearby coal mines were slated to be closed. At the same time, iron ore mining at Wabana stopped.

Bell Island's resource-based economy was hard-hit by the shutdown, resulting in a large out-migration of residents. Some moved to the nearby growing metropolitan centre of St. John's. In recent decades a reverse move has occurred where housing is being built on Bell Island to accommodate residents who wish to commute by ferry (20 minutes each direction) to Portugal Cove and travel to work in the city.

The scenic and sheltered waters of Conception Bay are also seeing an increase in pleasure boating activity as the suburban communities grow around nearby Conception Bay South.

In September 2015, concerns were expressed over the possible collapse of the abandoned tunnels that formed part of the Bell Island mine. A retired miner, Peter Young, told CBC Radio's On The Go that tunnels under the abandoned mines, going down as far as two kilometres, hold the potential for a large-scale disaster. He felt that a collapse would initiate a local earthquake giving rise to the secondary effect of the water level in Conception Bay around the mine dropping which in turn could force a tsunami from the surrounding ocean.

On April 2, 1978, there was a loud explosion on Bell Island which caused damage to some houses and the electrical house wiring in the surrounding area. Two cup-shaped holes about two feet deep and three feet wide marked the major impact. A number of TV sets in Lance Cove, the surrounding community, exploded at the time of the blast. It was initially thought to be caused by ball lightning. Meteorologists stated that atmospheric conditions at the time were not conducive to lightning. The boom was heard 55 kilometers away in Cape Broyle. The impact occurred in the Bickfordville area, on the southwestern side of the island.

The incident was investigated by John Warren and Robert Freyman from Los Alamos Scientific Laboratory, in New Mexico. It has been speculated that, due to the two men's place of work, they were investigating a secret weapons test and were military attachés. However, reacting to data received from the Vela satellites, they were in fact investigating a "superbolt" – an unusually large bolt of lightning, lasting an unusually long time: about a thousandth of a second.

A documentary that aired on the History Channel about electromagnetic pulse weapons investigated the speculation that the incident may have been a result of top secret experiments. It was postulated that either the Soviet or the U.S. governments were the cause of the 'attack' and that it involved high energy beams focused into the ionosphere that were attracted by the iron in abandoned mines. In the Skeptoid podcast "The Bell Island Boom", presenter Brian Dunning dismissed that theory, stating, "Although iron is magnetic and can be magnetized, natural iron ore has its molecules jumbled in every direction and rarely happens to have a significant magnetic field, certainly not strong enough to divert or attract a particle beam." Although some have pointed out that the natural oolitic iron ore on Bell Island is magnetic due to its hematite content, such ore does not generate a magnetic field, for the reasons Dunning discussed.

On April 23, 2019, hundreds of people on Bell Island heard a "loud bang" that "sounded like an explosion" followed by shaking that was felt as far as ten miles away in Harbour Grace. The cause was almost immediately determined to have been a massive section of rock breaking away from the northern part of the island and impacting the ground and sea with extreme force. Large cracks almost two feet across had been observed developing in the area in the years prior to the collapse and signs placed to warn visitors to stay away from the unstable features. The incident has cast doubt on some of the suspected causes of the original "Bell Island Boom".

Steve Lewis, an experienced cave diver, wreck diver and member of The Explorers Club, led a team that photographed and assessed the Bell Island mine for "condition, safety and feasibility" of future research in 2006. On February 4, 2007, expedition member Joseph T. Steffen died of an air embolism during a dive into the mine. The project continued despite the loss of this explorer and team members managed to lay approximately two kilometers of line and document many of the mine's artifacts. Their report also provided the Bell Island Heritage Society with important information on artifacts left when mining operations ended in 1966.

All content from Kiddle encyclopedia articles (including the article images and facts) can be freely used under Attribution-ShareAlike license, unless stated otherwise. Cite this article:
Bell Island (Newfoundland and Labrador) Facts for Kids. Kiddle Encyclopedia.