The landform known as Bethel Island was created in 1860, when a man named Stone reclaimed a tract of the southern shore of the California Delta. The reclaimed land was thereafter called "Stone Tract." Stone Tract contained an estimated area of 6,000 acres (24 km2), and did not become an island until more than 30 years later, when Dutch Slough was dredged eastward to join with Sandmound Slough.

The first post office opened in 1898, and named for its first postmaster Franklin Cloud Bethell. The second "L" was dropped by a rather pious postal commissioner that reportedly felt it would be ungodly to allow the new location to be called "Bet Hell", and took liberties to change it to "Bethel" (בית אל), meaning "House of God" in Hebrew. The post office closed in 1902. A Post Office re-opened on Bethel Island in 1947.

Though it was common for the era to name the post office after the post master, and for the communities to assume the name of the post office, there are some references to the area as "Bethell" referring to the Sand Mound Ranch farm established by a coalition led by Franklin's older brother, Warren King Bethell, Nicholas Harris (Sheriff of San Jose) and James C. Smith. Prior "owners" of these lands were considered "land speculators" and only performed the minimum amount of improvements to reclaim the land in order to secure land patents. This may not be a fair assessment of all, since some did make an honest attempt to reclaim the lands only to be forced out by changes in governmental policy and financial constraints.

Back to the Bethell's: Warren King Bethel was born in 1823 in Indiana to the Reverend Cloud Bethell, served in the Mexican War, and then came to California via the Isthmus of Panama in 1854. There, he engaged in mining for a few months, then settled in Santa Clara County, buying 250 acres on Almaden Road. On Aug 15, 1856, Warren married Ann Youree Hamilton. In 1871, Warren and Ann moved to San Jose and ran a Livery business. In 1872, along with Nicholas Harris and James C. Smith, Warren purchased the 3500 acre Sand Mound Ranch from Jessa Cheney and Van W. Phillips (Phillips went on to help establish the town of Antioch, California.)

Warren encouraged his younger brother, Franklin, to move West to assist in this new venture. Franklin C. Bethell (born: Cloud Franklyn Bethell) was born in 1833, 10 years junior to Warren, married Lucy Maria Hazen on June 2, 1857 in Indiana. Frank and Lucy had no children. There, Franklin did not appear to prosper in any noted occupation. Newspaper records of the time show Franklin as a frequent occupant of several of the finer hotels in San Francisco, Sacramento, and Brentwood. It is unclear if Franklin was employed by the Sand Mound Ranch, or if he had other means of income. After the death of his brother Warren, Franklin did purchase the lands that were previously held by Nicholas Harris, presumably using money inherited from his brother. Lands that were specifically titled to Warren went to his wife Ann. Both Ann and Franklin sold their lands in 1901. The portion along the levee of the lands held by James Smith stayed with his descendants until 1941.

In 1898, Franklin was appointed Post Master for the local post office, run out of his house near Horseshoe Bend. Prior to 1898, mail was delivered to the Post Office at Jersey Landing, and special service carried mail to the Sand Mound Ranch from there. Franklin's post office closed in 1902, however the name Bethel(l) was now officially tied to the locality.

A one-lane wooden bridge was built during the 1920s, with a recreational area for picnics and swimming. Known as Farrar Park, it was the first recreational business on the island. Hunters, fishermen, and boaters began buying property after World War II. Electricity was first supplied in 1946, and telephone service arrived in 1949. From then on, Bethel Island became an increasingly popular recreation spot. It is now the most densely populated island in the delta. The community calls itself, "The Heart of the Delta." 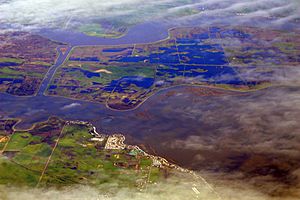 California Delta at flood stage, 2009. Bethel Island is at bottom left of image.

According to the United States Census Bureau, the CDP has a total area of 5.1 square miles (13 km2), all of it land. It is located on an island of the same name 9 miles (14 km) east of Antioch. The island is surrounded by Taylor, Piper, Dutch and Sandmound Sloughs, and protected by 11.5 miles (18.5 km) of earthen levees. The only land access is a bridge that connects Bethel Island Road to Cypress Road in Oakley.

Other nearby communities are Oakley, which adjoins Bethel Island on the west-southwest, and Brentwood, which is south of the island.

According to the Köppen Climate Classification system, Bethel Island has a warm-summer Mediterranean climate, abbreviated "Csa" on climate maps.

There were 1,113 households out of which 17.0% had children under the age of 18 living with them, 41.2% were married couples living together, 7.5% had a female householder with no husband present, and 45.6% were non-families. 35.8% of all households were made up of individuals and 13.9% had someone living alone who was 65 years of age or older. The average household size was 2.08 and the average family size was 2.66.

All content from Kiddle encyclopedia articles (including the article images and facts) can be freely used under Attribution-ShareAlike license, unless stated otherwise. Cite this article:
Bethel Island, California Facts for Kids. Kiddle Encyclopedia.