The Big Muddy Badlands are a series of badlands in southern Saskatchewan and northern Montana along Big Muddy Creek. They are found in the Big Muddy Valley, a cleft of erosion and sandstone along Big Muddy Creek. The valley is 55 kilometres (34 mi) long, 3.2 kilometres (2.0 mi) wide and 160 metres (520 ft) deep. The valley was formed when it was part of an ancient glacial meltwater channel that carried great quantities of water southeastward during the last ice age.

In the nineteenth and early twentieth century the Badlands formed the northern end of the "Outlaw Trail", a series of trails and stopping areas utilized by outlaws in the American West spanning from Canada to Mexico. Outlaws such as Henry Borne and his brother Coyote Pete, Sam Kelly, the Pigeon Toed Kid, and the notorious Sundance Kid turned up in the area. Today ranching and tourism are important in the sparsely populated area.

19 kilometres (12 mi) south of Bengough on Highway 34 is Castle Butte, a 70-metre-high (230 ft) outcrop of sandstone and compressed clay which protrudes from the flat prairie. 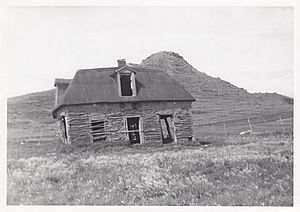 All content from Kiddle encyclopedia articles (including the article images and facts) can be freely used under Attribution-ShareAlike license, unless stated otherwise. Cite this article:
Big Muddy Badlands Facts for Kids. Kiddle Encyclopedia.