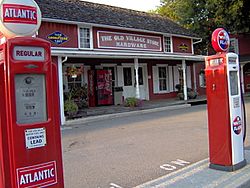 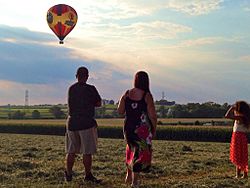 Bird-in-Hand, Pennsylvania is a census-designated place (CDP) in Lancaster County, Pennsylvania, United States, with parts lying in East Lampeter and Upper Leacock Townships. The community has a large Amish and Mennonite population. As of the 2010 census, its population was 402.

The area’s first inhabitants were Native American Shawnee and the Susquehannock.

The earliest settlers of what was to become Bird-in-Hand were Quakers and Swiss Mennonites. James Smith was the first of the Quakers known to have settled in the area, arriving by the year 1715. William and Dorothy McNabb were pioneer landowners and the owners of the original Bird-in-Hand Hotel. The Quakers built a meetinghouse and two-story academy, which stands today, next to the present day Bird-in-Hand fire company.

The community was founded in 1734. The legend of the naming of Bird-in-Hand concerns the time when the Old Philadelphia Pike was surveyed between Lancaster and Philadelphia. According to legend two road surveyors discussed whether they should stay at their present location or go on to the town of Lancaster. One of them supposedly said, "A bird in the hand is worth two in the bush," which means it is preferable to have a small but certain advantage than the mere potential of a greater one; and so they stayed. By 1734, road surveyors were making McNabb’s hotel their headquarters rather than returning to Lancaster every day. The sign in front of the inn is known to have once "portrayed a man with a bird in his hand and a bush nearby, in which two birds were perched," and was known as the Bird-in-Hand Inn. Variations of this sign appear throughout the town today.

In 1834 construction began on the 86-mile Pennsylvania Railroad line between Philadelphia and Columbia. Bird-in-Hand, featuring tanneries, feed mills, coal and lumber yards, was the most important stop on the Lancaster to Coatesville section.

In 1836 the village post office was established as the Enterprise Post Office, as the village was then officially called, until the name officially changed to Bird-in-Hand in 1873.

The town remained relatively unknown until a musical called Plain and Fancy opened in New York in 1955. The play was set in the village of Bird-in-Hand and is often credited as a catalyst for the boom in Pennsylvania Dutch Country tourism in the mid-twentieth century. The Plain & Fancy Restaurant opened in 1960, and is the oldest "family-style restaurant" in the area. Bird-in-Hand is often named in lists of "delightfully-named towns" in Pennsylvania Dutchland, along with Intercourse, Blue Ball, Lititz, Bareville, Mount Joy and Paradise.

In 1968 the Smucker family opened a small 30-room motel called the Bird-in-Hand Motor Inn, with an adjacent coffee shop, in hopes of capitalizing on the growing tourist trade in the area. Over the years the small coffee shop grew into the larger Bird-in-Hand Family Restaurant and Smorgasbord.

The Bird-in-Hand Village Inn and Suites was listed on the National Register of Historic Places in 1992.

The town is home to the Bank of Bird-in-Hand, the first bank in the United States to open following the passage of the Dodd Frank Act.

All content from Kiddle encyclopedia articles (including the article images and facts) can be freely used under Attribution-ShareAlike license, unless stated otherwise. Cite this article:
Bird-in-Hand, Pennsylvania Facts for Kids. Kiddle Encyclopedia.