Mount Joy is a borough in Lancaster County, Pennsylvania, United States. The population was 7,410 at the 2010 census.

The name is often shortened to Mt Joy, as in Mencken (1963). However, citizens of the town often point out that this abbreviation is not proper because the town is not named for a mountain but is named after the Good Ship "Mountjoy" which famously broke a Catholic siege during the Siege of Derry. Due to the early settlement of the Protestant Scots-Irish in this region of Pennsylvania, many of the municipalities in the area were given names common to the North of Ireland such as: Derry Township, Londonderry Township, South Londonderry Township, Mount Joy Township, East Donegal Township, West Donegal Township, and Rapho Township. 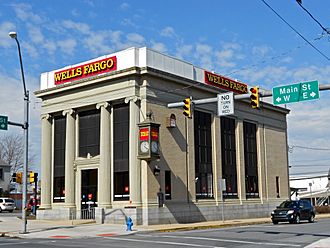 According to the United States Census Bureau, the borough has a total area of 2.3 square miles (6.1 km²), all of it land. It is considered to be part of the Susquenanna Valley.

All content from Kiddle encyclopedia articles (including the article images and facts) can be freely used under Attribution-ShareAlike license, unless stated otherwise. Cite this article:
Mount Joy, Pennsylvania Facts for Kids. Kiddle Encyclopedia.