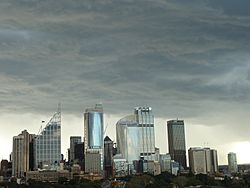 The dark storm clouds associated with the Black nor'easter over Sydney CBD.

A Black nor'easter is a persistent and potentially violent north-easterly storm that occurs on the east coast of Australia during spring and summer, usually about two days a year. It is not a convection wind, but a storm system that develops offshore which can last several days. This is heralded by the rapid build-up of dense black cloud that can convert to a gale in well under one hour, and also bringing with it a heavy rainfall event usually accompanied by a thunderstorm. This type of storm was first recorded during the 1800s.

Northeasterly sea breezes are a common occurrence on the NSW coast during summer, generated by temperature imbalances between the sea and the land. A broader synoptic pattern however can greatly intensify these onshore winds, which results in a "Black Nor'easter", so-named because of its dark grey to virtually black clouds and the moist gale force winds (around 60 kilometres per hour) brought on by intense high-pressure systems, thus eventually bringing thunderstorms, dramatic rainfall and at times hail.

On a hot sunny day in Sydney, the land heats up rapidly during the morning. The prevailing early morning wind is a light south-west offshore breeze (a katabatic wind) that blows from land to sea, but as the land heats up a north-east convection wind develops. A typical sea breeze, it starts shortly after sunrise on the coast and gradually pushes inland as the day proceeds, typically reaching the city by mid to late morning and the Greater Western Sydney area by early to mid afternoon. Though it doesn't dramatically decrease the temperatures as the southerly buster does, it would bring heavy rain, thunder and even hail at times.

Referred as an anticyclone intensification, the nor'easter causes a sharp leap in wave heights from the east-northeast for the east coast, conjuring a strong north-east air current and east-north east storm waves over the western Tasman Sea. The winds ofttimes produce large waves and, when combined with an east coast low, they bring forth the most intense storm wave environment. The north-east wind field leading warm moist tropical air to the subtropics and mid-latitudes can combine with a higher level cut off low from the Southern Ocean.

Due to the strong winds caused by the Black Nor'easterly storms, a number of people in New South Wales (especially in Sydney) have been killed by falling trees. Furthermore, such storms also bring torrential floods, strike down power lines (where thousands of homes and businesses would be left without electricity) and collapse roofs.

In February 2010, Sydney received some of the highest and heaviest rainfalls in 25 years which were accompanied by violent thunderstorms and gusty winds that cut out power and damaged homes. The heavy rain was caused by remnants of ex-tropical Cyclone Olga and by a massive amount of moisture blowing in on north-east winds which slammed into a low pressure trough.

The 'Black Nor'Easter' swell of June 2016 remoulded areas of the east Australian coastline, with backyards tumbling down into the sea at Collaroy and the houses adjoining them damaged. Bridges, piers, and walkways were felled as well. Almost every north facing beach endured some level of erosion, from unsophisticated scouring of the foredune to waves devouring into the brown dirt. In Cronulla, several large boulders were thrown from beneath the tide zone up onto a rock platform.

All content from Kiddle encyclopedia articles (including the article images and facts) can be freely used under Attribution-ShareAlike license, unless stated otherwise. Cite this article:
Black nor'easter Facts for Kids. Kiddle Encyclopedia.