Blackberry Run is a tributary of East Branch Fishing Creek in Sullivan County, Pennsylvania, in the United States. It is approximately 2.5 miles (4.0 km) long and flows through Davidson Township. The watershed of the stream has an area of 1.91 square miles (4.9 km2). The stream is acidic and is considered by the Pennsylvania Department of Environmental Protection to be impaired by atmospheric deposition. Rock formations in the watershed include the Catskill Formation and the Huntley Mountain Formation. Soils in the watershed include the Deep-Wellsboro-Oquaga, Wellsboro, and Norwich soil associations. 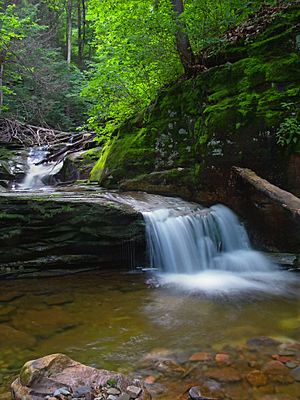 A waterfall on Blackberry Run

Blackberry Run begins on a plateau in Davidson Township. It flows south for a short distance before turning southeast into a deep valley. After some distance, it turns south-southeast, following the valley. It eventually leaves the valley and reaches its confluence with East Branch Fishing Creek near the border between Sullivan County and Columbia County.

Blackberry Run experiences chronic acidification. However, it does not degrade the water quality of East Branch Fishing Creek as significantly as the creek's tributaries further upstream do.

The water quality of Blackberry Run is considered to be "severe" during high-flow conditions, a rating worse than "very poor", which the stream is rated as in normal flow conditions. Blackberry Run requires an additional 66 pounds (30 kg) of alkalinity per day to be restored to satisfaction of the East Branch Fishing Creek Restoration Plan. One proposed method of increasing the alkalinity of the stream is the construction of vertical flow wetlands at its headwaters. Other proposed methods include road liming and high flow buffer channels.

Blackberry Run is designated by the Pennsylvania Department of Environmental Protection for use by aquatic life. However, the stream is considered to be impaired due to atmospheric deposition.

The lower half of Blackberry Run flows over rock of the Catskill Formation. Further upstream, the stream flows over the Huntley Mountain Formation. The stream's upper reaches are on the Burgoon Sandstone.

Most of Blackberry Run is surrounded by Pennsylvania State Game Lands. There is a forested trail near the stream.

Blackberry Run was used as a water supply for industrial and domestic uses, in particular, for the residents of Jamison City, in the early 1900s. Part of the stream was closed to fishing in 1920. A large tannery operated on the stream in the past.

Blackberry Run was listed as impaired by the Pennsylvania Department of Environmental Protection in 2002. As of December 2011, a total maximum daily load is scheduled for 2015.

Great-spurred violet plants have been observed near Blackberry Run. The stream is designated as a high-quality coldwater fishery.

All content from Kiddle encyclopedia articles (including the article images and facts) can be freely used under Attribution-ShareAlike license, unless stated otherwise. Cite this article:
Blackberry Run Facts for Kids. Kiddle Encyclopedia.