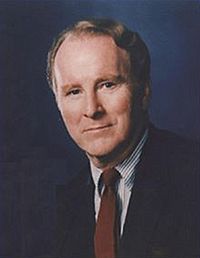 Robert Kenneth Dornan (born April 3, 1933) is an American politician, actor and radio personality. He was the Republican member of the United States House of Representatives from California's 27th, 38th and 46th congressional districts from 1977 to 1983 and again from 1985 to 1997.

Dornan was born in New York City to a Roman Catholic family. He studied at Loyola Marymount University in Los Angeles. In 1952, he joined the United States Air Force as a fighter pilot. In 1955, he married Sallie Hansen. They have five children.

Dornan also served as a combat journalist and photographer on several missions in Vietnam, Laos, and Cambodia during the Vietnam War and flew relief flights into Biafra. He was on active duty until 1958, and attained the rank of Captain. He was in the California Air National Guard and Air Force Reserve until 1975.

Dornan ran for the Republican nomination for President of the United States in the 1996 election, but lost the nomination to Kansas United States Senator Bob Dole. Dornan also lost his House re-election in 1996 to Loretta Sanchez by 979 votes.

In 2004, Dornan ran again for the House against incumbent Dana Rohrabacher, but lost in a landslide.

His grandson was actor Miguel Ferrer.

Dornan took an active role in the civil rights movement. He took part in the historic 1963 March on Washington led by Martin Luther King Jr. The following year he helped register African Americans to vote in Mississippi.

Dornan was also an actor and had a recurring role as Captain Fowler on ABC's Twelve O'Clock High television series and smaller roles on ABC's Bewitched and NBC's I Dream of Jeannie.

All content from Kiddle encyclopedia articles (including the article images and facts) can be freely used under Attribution-ShareAlike license, unless stated otherwise. Cite this article:
Bob Dornan Facts for Kids. Kiddle Encyclopedia.