Bow Creek is a tributary of Big Wapwallopen Creek in Luzerne County, Pennsylvania, in the United States. It is approximately 4.5 miles (7.2 km) long and flows through Fairview Township and Wright Township. The watershed of the creek has an area of 4.69 square miles (12.1 km2). The creek has no named tributaries, but several unnamed ones, such as Bow Creek Tributary A. Bow Creek has been historically nearly devoid of life, but is now considered to be Class A Wild Trout Waters. There is a bridge carrying Pennsylvania Route 309 across the creek. Wisconsinan Till, alluvium, and bedrock consisting of sandstone, shale, conglomerate, and coal occur in the watershed. Several volatile organic compounds have been detected in small amounts in surface water in the watershed. The creek occasionally floods, but such flooding typically causes little damage. 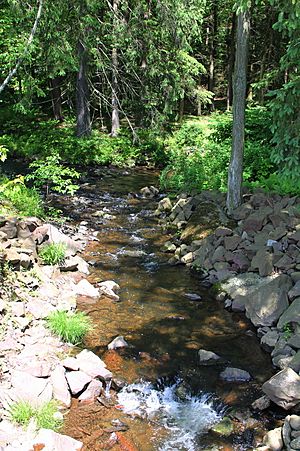 Bow Creek begins on Arbutus Peak in Fairview Township. It flows south for several tenths of a mile until reaching the community of Glen Summit, where it turns west and crosses Pennsylvania Route 437. The creek then receives two unnamed tributaries from the left before briefly turning north and then turning back south again and continuing west-northwest. After several tenths of a mile, it enters Rice Township, receives an unnamed tributary from the right, and crosses Pennsylvania Route 309 before turning southwest for nearly a mile until it reaches its confluence with Big Wapwallopen Creek on the border between Wright Township and Rice Township.

The concentration of alkalinity in the waters of Bow Creek is 10 milligrams per liter.

Part of Bow Creek was dry during the summer and early autumn of 2007.

The headwaters of Bow Creek are on a mountain known as Arbutus Peak.

The upper reaches of Bow Creek are mostly on a glacial or resedimented till known as the Wisconsinan Till. However, there are some areas containing bedrock consisting of sandstone, shale, conglomerate, and coal. The same is true in the lower reaches of the watershed, but there are also areas of alluvium along the creek near its mouth.

The entire length of Bow Creek is in private land. The creek and its unnamed tributary sometimes flood, but since their floodplains are in relatively undeveloped areas, such floods typically cause little damage. A wetland known as the Bow Creek Fen is located in the creek's watershed.

In the early 1900s, the Luzerne County commissioners received approval to construct a bridge across Bow Creek in Wright Township. A concrete tee beam bridge carrying Pennsylvania Route 309 was constructed over Bow Creek in 1929. It is 27.9 feet (8.5 m) long and is located in Wright Township. In 2013, the bridge received a weight restriction of 28 tons (35 tons for combination loads).

In the 1970s, the Pennsylvania Department of Economic Resources had a significant amount of interest in Bow Creek. In addition to periodic stream surveys, they performed electrofishing surveys and determined diversity index values for benthos. A request was made in 2012 to redesignate Bow Creek and several dozen other streams as High Quality Coldwater Fisheries due to the fact that they already met the requirements for Class A Wild Trout Waters status.

Bow Creek is considered by the Pennsylvania Fish and Boat Commission to be Class A Wild Trout Waters for both brook trout and brown trout from its headwaters to its mouth. A 298-acre tract of land owned by the North Branch Land Trust in Fairview Township contains a section of the creek that is said to be "teeming" with native brook trout. The main stem of the creek from Pennsylvania Route 309 to its mouth is designated as a Coldwater Fishery and a Migratory Fishery. However, its existing uses are High-Quality Coldwater Fishery and Migratory Fishery.

In the early 1970s, Bow Creek was nearly devoid of aquatic life and its streambed was covered in large populations of Sphaerotilus, a sewage bacterium. However, five years later, it was "a showplace" and a "cold-water trout stream" with substantial fish populations. The change was made over a three-year period by two teams, one consisting of state government environmentalists and one consisting of people from the industry.

All content from Kiddle encyclopedia articles (including the article images and facts) can be freely used under Attribution-ShareAlike license, unless stated otherwise. Cite this article:
Bow Creek (Big Wapwallopen Creek tributary) Facts for Kids. Kiddle Encyclopedia.