Bowling (Scots: Bowlin, Scottish Gaelic: Bolan) is a village in West Dunbartonshire, Scotland, with a population of 740 (2015).

It lies on the north bank of the Firth of Clyde, between the towns of Clydebank and Dumbarton. It is at one end of the Antonine Wall and therefore represents the extreme limit of the Roman Empire on the west coast of the island of Great Britain.

Forth and Clyde Canal 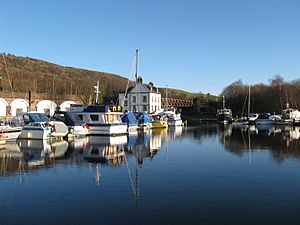 Bowling basin, with the railway arches and bridge of the disused Lanarkshire and Dunbartonshire Railway.

Bowling is the location of the western terminus of the Forth and Clyde Canal, opened in 1790, and it is the western gateway to the Lowland canals.

In 2008, British Waterways Scotland, in conjunction with Scottish Enterprise Dunbartonshire, completed a £1.4 million regeneration programme at Bowling Basin to provide additional moorings and improved facilities. At the time there were plans for future use of an area of 140 acres (60 hectares) of land adjacent to Bowling, in conjunction with Clydeport.

In June 2008, Lord Provost Denis Agnew, joined local schoolchildren and community groups to celebrate the completion of a £163,000 project to improve seven kilometres of towpath on the Forth & Clyde Canal from Bowling Harbour to Whitecrook in Clydebank.

In 2007, Bowling welcomed the "Vital Spark", one of only five surviving Clyde puffers, and the first of its kind to sail into Bowling Harbour for more than 40 years. The Forth & Clyde Canal is regarded as the birthplace of the puffers, which had to be small enough to negotiate the Crinan Canal. The archetypal puffer, the Vital Spark, appeared in the "Para Handy" books by Neil Munro and two television series of the same name.

Bowling has been long associated with shipbuilding and ship repairing. The opening of the Forth and Clyde canal at Bowling in 1790 increased the number of vessels passing through the small village on their way to Glasgow.

The first shipbuilding name in Bowling is that of Thomas MacGill, originally from Glasgow. He rented the Graving dock in 1800, for which he paid £25 in the first year. McGill and two of his sons built vessels at Bowling until 1843 when the yard was forced to close due to an extension of the Forth and Clyde Canal basin.

In 1851 a new partnership was formed at Bowling between Thomas MacGill's two sons, David and Thomas, and James Scott, whose father owned land at Littlemill. The company was known as Scott & MacGill. The shipyard was located on ground known as Frisky Hall Orchard and this small yard built wooden sailing vessels until, in 1874, it built its first iron vessel.

In 1876 Thomas MacGill retired from the firm, leaving James Scott on his own and the name of the company was changed to Scott and Company. A partnership was formed in 1892 between James Scott and his two sons, Charles Wood Scott and James Scott Junior. The firm's name was changed again, to Scott and Sons. The firm continued to prosper well into the twentieth century, building in excess of 450 vessels, many of these being passenger vessels and coasters for Gardner & Stewart. In 1958, following the retirement of James W. Scott, the firm became a limited company, trading under the name Scott Sons (Bowling) Limited.

In June 1965, the company was taken over by Scotts Shipbuilding and Engineering Company of Greenock. In 1979 the decision was taken to close the shipbuilding yard. The last vessel to leave the yard was the Laggan built for Forth Tugs Limited of Grangemouth.

One well-known ship built by Scott was the MV Saint Bedan, launched in January 1937. After several changes of ownership and name, it became MV Panagiotis and allegedly spent its later life as a smuggling ship in the Ionian Sea. It ran aground at Navagio Beach on the Ionian Island of Zakynthos (Zante) in 1980, becoming one of the most picturesque and well-visited shipwrecks in the world.

Glenarbuck House is a Category B listed building in Bowling. It was built in 1804 for the merchant Gilbert Hamilton (1744-1808) who was the first president of the Glasgow Humane Society, a founding member of Glasgow Chamber of Commerce and Glasgow's Lord Provost in 1792. Later owners included the Duke of Sutherland and the Scott family of the shipbuilders Scott and Sons.

Bowling Church is in the same parish as Old Kilpatrick Church.

The village has an annual Gala Day in June, at which a girl is crowned Queen for a day. The ceremony starts at Bowling Memorial Park and continues to Bowling Hall.

All content from Kiddle encyclopedia articles (including the article images and facts) can be freely used under Attribution-ShareAlike license, unless stated otherwise. Cite this article:
Bowling, West Dunbartonshire Facts for Kids. Kiddle Encyclopedia.