Kilbowie Road in Clydebank, featuring Clydebank railway station, with the skyline dominated by the Titan Crane.

Clydebank (Scottish Gaelic: Bruach Chluaidh) is located within the historical boundaries of the ancient Kingdom of Strathclyde, the Mormaerdom of Lennox, and the parish of Old Kilpatrick (12th century), on the north bank of the River Clyde. A long-standing local legend is that the village of Old Kilpatrick derived its name from being the birthplace of Saint Patrick, the patron saint of Ireland. There do not appear to be any historical sources which support this, however.

Before 1870, the area which later became Clydebank was largely rural, and agricultural. It consisted of some villages (Hardgate, Faifley, Duntocher, Dalmuir, Old Kilpatrick), farms and estates, with some small scale mining operations (coal, limestone and whinstone), several cotton mills and some small boatbuilding yards. 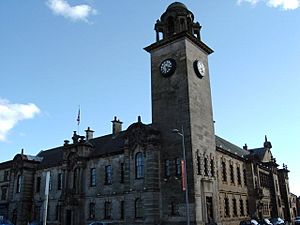 Underlining Clydebank's status as a police burgh after 1886, the Town Hall and Public Library were designed by James Miller and opened in 1902. The buildings are now B-listed and home of Clydebank Museum.

At the start of the 1870s, however, the growing trade and industry in Glasgow resulted in the Clyde Navigation Trustees needing additional space for shipping quays in Glasgow. They used their statutory powers to compulsorily purchase the area occupied by the Clyde Bank Iron Shipyard in Govan, which belonged to J & G Thomson. Forced to find another site for their shipyard, J & G Thomson looked at various sites further down the River Clyde, and eventually purchased, from the estates of Miss Hamilton of Cochno, some suitably flat land on the "West Barns o'Clyde" on the north bank of the river, opposite the point where the River Cart flows into the River Clyde. The land was situated close to the Forth and Clyde Canal and to the main road running west out of Glasgow to Dumbarton, and so was conveniently positioned for transporting materials and workers to and from the shipyard. The position opposite the mouth of the River Cart was to also to prove important as the shipyard grew, since it enabled the company to build much bigger, heavier ships than would otherwise have been possible that far up the Clyde. Construction of the new shipyard started on 1 May 1871.

Initially, the company transported workers to and from the shipyard by paddle steamer (passenger steamers were commonly used by people to travel up and down the Clyde well into the second half of the 20th century). However it was not ideal, having to ship workers to and fro all the time, so the company also started building blocks of tenement flats to house the workers. These first blocks of housing became known unofficially as "Tamson's (Thomson's) Buildings", after the name of the company.

Gradually, as the shipyard grew, so did the cluster of buildings grow nearby. More houses, a school, a large shed which served as canteen, community hall and church (known as the "Tarry Kirk"), then finally two proper churches in 1876 and 1877. As the resident population grew, so did the needs and problems associated with a growing population. Other manufacturers and employers moved into the area, and by 1880 approximately 2,000 men were living and working there.

In 1882 a railway line was built running from Glasgow out to the new shipyard (the Glasgow, Yoker and Clydebank Railway). This was followed by the Lanarkshire and Dunbartonshire Railway during the 1890s. Then, between 1882 and 1884, the Singer Manufacturing Company built a massive sewing machine factory in Kilbowie, less than 1⁄2 mile (800 m) north of the Clyde Bank shipyard. More people moved into the area, and finally, in 1886, the local populace petitioned for the creation of a police burgh, on the basis that the area now qualified as a "populous place". The petition was granted, and the new town was named after the shipyard which had given birth to it – Clydebank.

On 13 and 14 March 1941, Luftwaffe bombers attacked various targets in and around Clydebank. In what became known as the Clydebank Blitz, the town itself was seriously damaged as were the local shipyards and armaments factories such as the Dalnottar Oil depot and the Singer's Sewing Machine factory. Over the two days 528 civilians were killed and over 617 people were seriously injured.

Dalmuir, Drumry, Duntocher, Faifley, Hardgate, Kilbowie, Linnvale, Mountblow, Parkhall, Radnor Park, Town Centre, Whitecrook and a small part of the Yoker district of Glasgow City (sometimes termed Clydebank East) are part of Clydebank. However as each was annexed to the town during the existence of the former burgh and district councils, these three areas continue to have fairly strong local identities separate from that of the town.

The town exists in the local zeitgeist as comprising the above listed areas, however the former Clydebank District also included the settlements of Bowling and Old Kilpatrick, while for statistical purposes the town is divided into several localities; namely Faifley, Duntocher & Hardgate, Old Kilpatrick, and a rump Clydebank. 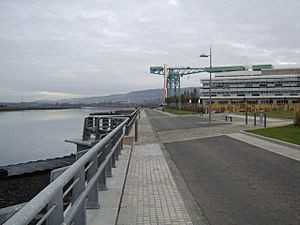 The town currently has a fairly moderate official unemployment rate of around 6%, however 20% of the population are described by Scottish National Statistics as "employment deprived".

A major employer in the town was its founding firm, the John Brown & Company shipyard, which built several well-known ships, including the RMS Lusitania, Hood, Queen Mary, Queen Elizabeth, and Queen Elizabeth 2. Later it became part of Upper Clyde Shipbuilders, which was the scene of a famous "work-in" in the 1970s. The yard and associated engineering works continued to operate under a succession of owners until it was closed in 2000. The site is now in the process of being redeveloped, with tourist attractions such as the Titan Clydebank Crane and a new campus for Clydebank College a new college for further education.

Singer Corporation was also a major industry in Clydebank, giving thousands of jobs to the townsfolk but closed in 1980, with the Clydebank Business Park later created where its famous building used to stand (next to where Singer railway station is now).

The town is home to the independent Clydebank Co-operative Society which has a number of outlets in the town. The towns main department store closed in 2013 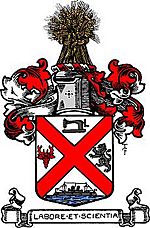 The Burgh of Clydebank adopted an unofficial coat of arms in 1892, when it was required to obtain a common seal by the Burgh Police (Scotland) Act 1892. The design was described disparagingly by Arthur Charles Fox-Davies as a fine healthy specimen of home-made heraldry.

The design comprised a shield surmounted by a mural crown, above which was a helm bearing a wreath and crest. In the centrepiece of the shield was a Lennox Cross representative of the ancient Earls of Lennox. In chief position was a sewing machine representing the Singer Corporation and in base position "on the waves of the sea" was a representation of the battleship HMS Ramillies built at J & G Thomson's Clydebank Shipyard in 1892. In the dexter fess position was a stag's head taken from the coat of arms of shipbuilder James Rodger Thomson, the first Provost of the Burgh. In sinister fess position there was a lion rampant taken from the coat of arms of local landowner, Alexander Dunn Pattison of Dalmuir.

The crest was a garb or wheatsheaf representing the agricultural interests of the area.

The Latin motto below the shield was Labore et Scientia or by work and by knowledge.

In 1929 there was a concerted campaign by the office of Lord Lyon King of Arms to ensure that all burghs using unmatriculated arms regularised their position, and more than fifty burghs registered arms between 1929 and 1931. This led to Clydebank's arms being matriculated on 6 February 1930. The 1930 grant was almost identical to the 1892 device.

In 1975 the burgh was abolished, becoming part of larger Clydebank District, and the burgh arms went out of use. Clydebank District Council was granted new arms on 3 September 1975. This consisted of a red saltire on a white field for the ancient province of Lennox and for the town's more recent historic links to Ireland which previously used the same flag. The cog-wheel symbolised all the local industries and the demi-figure of Saint Patrick referred to Old Kilpatrick, a burgh of barony from 1672, and where the saint is reputed to have been born. A representation of part of the Roman Antonine Wall was included as the Wall and Roman forts at Old Kilpatrick and Greenhill were features common to the burgh and to the villages in the District. The lymphad (galley ship) was for Clyde shipbuilding. The burgh motto was retained. At the request of the district council, the arms were rematriculated on 19 April 1985 with the addition of a dove of peace in the centre of the saltire. The coat of arms went out of use in 1996 with the abolition of the District Council. In 1998 the successor West Dunbartonshire Council was granted very similar arms. 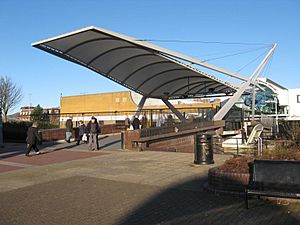 Formerly, the town was connected to the once extensive Glasgow tramway system, being served by routes 9 (via Dumbarton Road) and 1A (via Anniesland). Route 20 served Duntocher. Route 9 (to Dalmuir) was the last service to close. Clydebank held its own 'last tram' day on 6 September 1962, four days after the official end of tramway operation in Glasgow, bringing to an end the operation of the last major tramway system in Great Britain.

All content from Kiddle encyclopedia articles (including the article images and facts) can be freely used under Attribution-ShareAlike license, unless stated otherwise. Cite this article:
Clydebank Facts for Kids. Kiddle Encyclopedia.