Breathing is moving air in and out of the lungs. The air going in and out is called breath. If a person cannot breathe, they will die. 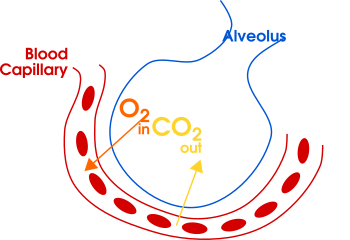 Gas exchange in humans. Oxygen and carbon dioxide switch places between a capillary (part of the bloodstream) and an alveolus (an air sac in the lungs).

Adults breathe about 18 times a minute, which is more than 25,000 times a day. Children breathe even faster.

How the brain controls breathing

The medulla oblongata (in red)

Animation of how the diaphragm (in green) works

About 60% - 70% of a person's ability to breathe comes from the diaphragm.

The intercostal muscles run between each rib. When a person needs to breathe in, these muscles contract and pull the ribs upward. This creates more room inside the chest for the lungs to fill.

When a person is resting, the about 30% to 40% of their ability to breathe comes from the intercostal muscles. 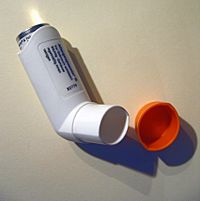 However, if a person has to use accessory muscles to breathe while they are resting, this is a sign that they are not getting the oxygen their body needs. They may need medication, extra oxygen given through a mask, or even emergency medical treatment to help them breathe normally. For example, people with asthma or chronic obstructive pulmonary disease (COPD) often use an inhaler when they have trouble breathing. The inhaler puffs a medicine like albuterol down into the windpipe and into the lungs. This makes the air passages wider and helps the person breathe better than they could before.

All content from Kiddle encyclopedia articles (including the article images and facts) can be freely used under Attribution-ShareAlike license, unless stated otherwise. Cite this article:
Breathing Facts for Kids. Kiddle Encyclopedia.