Brookfield (formerly Grossdale) is a village in Cook County, Illinois, United States, 13 miles (21 km) west of downtown Chicago. The population was 18,978 at the 2010 census. It is home to the Brookfield Zoo.

Most of Brookfield is flat land with various small hills and rises. Along Salt Creek is a steep ravine that is home to many oak savannas. These oak savannas are the primary ecosystem of Brookfield, and sprawl out from large, forested areas into small pockets in the village.

There were 7,536 households out of which 31.3% had children under the age of 18 living with them, 52.5% were married couples living together, 10.6% had a female householder with no husband present, and 33.2% were non-families. 27.8% of all households were made up of individuals and 11.4% had someone living alone who was 65 years of age or older. The average household size was 2.50 and the average family size was 3.10.

Before 1803, the area now called Brookfield was mostly covered by prairie grasses, forests, and farms. Large portions of the area were inhabited by the Native Americans who long ago developed agriculture and corn cultivation, built villages and burial mounds, invented the bow and arrow, and made beautiful pottery.

Settlement of the village dates to 1889 when Samuel Eberly Gross, a Chicago lawyer turned real estate investor, began selling building lots plotted from farms and woodlands he had acquired along both sides of the Chicago, Burlington & Quincy Railroad line, which provided passenger and freight service between Chicago and Aurora, Illinois. "Grossdale", as his development was originally called, offered suburban living at prices affordable to working-class families.

The first two buildings Gross erected were a train station south of the tracks at what is now Prairie Avenue, and a pavilion across the tracks. The original train station was moved across the tracks and a few hundred feet east in 1981, and is now the home of the village's historical society and museum, as well as listed on the National Register of Historic Places. The pavilion housed the first post office, general store, Gross' real estate office, meeting rooms, and eventually a dance hall. Gross offered free train outings from Chicago to Grossdale where the prospects were met at the station by a band and treated to a picnic lunch complete with a sales pitch from Gross. In addition to parcels of land, he had a number of house designs to offer at "cheap" prices.

Gross later added the subdivisions of Hollywood (1893) and West Grossdale (1895), each with its own train station. Residents voted to incorporate as the village of Grossdale in 1893. The name was changed in 1905 after residents became displeased with Gross, whose personal life and fortune had floundered. A contest to choose a new name yielded "Brookfield" in respect for Salt Creek, which runs through the area. Gross also has a school named after him called S.E. Gross.

In 1920, the old Plank Toll Road, now called Ogden Avenue (US Hwy 34), was paved, providing easy automobile access to and from Chicago.

The Chicago Zoological Park, commonly called the Brookfield Zoo, opened in 1934. The zoo is located on land given to the Forest Preserve District by Edith Rockefeller McCormick in 1919. 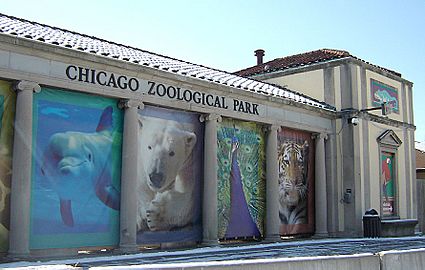 All content from Kiddle encyclopedia articles (including the article images and facts) can be freely used under Attribution-ShareAlike license, unless stated otherwise. Cite this article:
Brookfield, Illinois Facts for Kids. Kiddle Encyclopedia.