Buckland is a town in Franklin County, Massachusetts, United States. The population was 1,816 at the 2020 census. The town shares the village of Shelburne Falls with neighboring Shelburne. The town center at Shelburne Falls is the western end of the Bridge of Flowers, a local tourist attraction.

Buckland is part of the Springfield, Massachusetts Metropolitan Statistical Area. 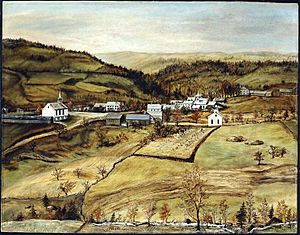 Buckland was first settled in 1742 as "No Town", as it was not currently part of either the village of Charlemont or Ashfield, which the land belonged to as one large town. A sawmill was set up that year by Othneil Taylor and Asaph White, and eventually settlement occurred. However, the townspeople did not want to cross the Deerfield River or travel the long distance to Ashfield Village to attend services, so they petitioned the Massachusetts General Court for a separate incorporation. The town was incorporated on April 14, 1779 as Buckland, presumably named for the abundant hunting in the area. 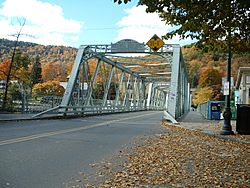 Buckland lies along the banks of the Deerfield River, which bends from northward to westward along the town line. Clesson Brook and Clark Brook flow northward through town towards the river, with the former forming the main valley in the town. To either side of the valley lie several hills, including Walnut Hill, Drank Hill and Snow Mountain to the west and Mary Lyon Hill and Moonshine Hill to the east, both of which are between the two brooks. Moonshine Hill is also home to a small state forest.

A short section of Massachusetts Route 2, known as the Mohawk Trail, passes through the northeast corner of town. The nearest interstate, Interstate 91, passes through nearby Greenfield.

There is a park and ride lot located on Route 2, near the bridge over the river to Shelburne Falls. South of the river, the freight rail line passes from Conway in the east towards the Hoosac Tunnel through the mountains to the west. Buckland lies along the Charlemont bus line of the Franklin Regional Transit Authority (FRTA), but has no scheduled stops in town (the nearest being in Charlemont and Shelburne Falls). The nearest Amtrak station is in Greenfield, and the nearest small air service is at Turners Falls. The nearest national air service is at Bradley International Airport in Windsor Locks, Connecticut. 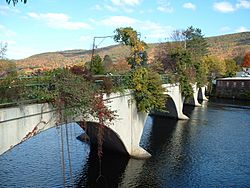 The Bridge of Flowers

There were 772 households, out of which 33.2% had children under the age of 18 living with them, 54.1% were married couples living together, 11.9% had a female householder with no husband present, and 29.7% were non-families. 21.8% of all households were made up of individuals, and 8.2% had someone living alone who was 65 years of age or older. The average household size was 2.57 and the average family size was 3.00.

Buckland is a member of the Mohawk Trail Regional School District, which covers six towns on the elementary level and most of western Franklin County on the upper levels of education. Buckland-Shelburne Regional Elementary School (in Shelburne) serves students from pre-kindergarten through sixth grades for the two towns, and students from grades 7-12 attend Mohawk Trail Regional High School. Mohawk Trail Regional's athletics teams are nicknamed the Warriors, and their school colors are blue and gold. There are several private, religious and charter schools located in the Greenfield area, with the most prominent being Deerfield Academy in Deerfield, Northfield Mount Hermon School in Gill, the Academy at Charlemont in Charlemont, Eaglebrook School in Deerfield, and Stoneleigh-Burnham School in Greenfield.

All content from Kiddle encyclopedia articles (including the article images and facts) can be freely used under Attribution-ShareAlike license, unless stated otherwise. Cite this article:
Buckland, Massachusetts Facts for Kids. Kiddle Encyclopedia.