Conway is a town in Franklin County, Massachusetts, United States. The population was 1,761 at the 2020 census. It is part of the Springfield, Massachusetts Metropolitan Statistical Area.

Conway was first settled in 1762 as the southwest portion of Deerfield. The town was eventually separated and was officially incorporated in 1767. The town was named for General Henry Seymour Conway, a leader in the British House of Commons during repeal of the Stamp Act. (Conway, New Hampshire, as well as other towns across the country, were also named for him.) The town was known for its sheep farming and other agrarian pursuits in its early years, with some industry along the South River which was washed out in a dam break in 1869. Today the town is still mostly a farming community.

On February 25, 2017, an EF1 tornado touched down in Conway. The tornado caused significant damage to localized areas. It was the first tornado in the month of February in Massachusetts state history. 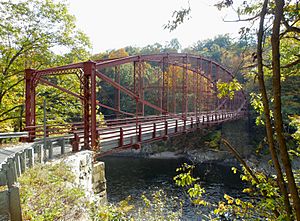 According to the United States Census Bureau, the town has a total area of 37.9 square miles (98.1 km2), of which 37.7 square miles (97.6 km2) is land and 0.19 square miles (0.5 km2), or 0.47%, is water. Conway is in the central part of the county, and is bordered by Shelburne to the north, Deerfield to the east, Whately to the southeast, Williamsburg to the south, Goshen to the southwest, Ashfield to the west, and Buckland to the northwest. Conway is 10 miles (16 km) southwest of Greenfield, 32 miles (51 km) north-northwest of Springfield, and 99 miles (159 km) west-northwest of Boston.

Massachusetts Route 116 passes through the center of town, from Ashfield in the east towards Deerfield, along its way towards Springfield. Deerfield also has the nearest exits of Interstate 91, the nearest interstate highway to the town. A stretch of freight rail passes through the northern part of town, along the banks of the Deerfield River, between Deerfield and the Hoosac Tunnel to the west. The nearest passenger rail service can be reached at the Amtrak station in Amherst, with the nearest bus service in Deerfield. The nearest small airport is in Turners Falls, with the nearest national air service being at Bradley International Airport in Windsor Locks, Connecticut.

There were 692 households, out of which 36.3% had children under the age of 18 living with them, 61.4% were married couples living together, 9.0% had a female householder with no husband present, and 25.9% were non-families. Of all households, 18.8% were made up of individuals, and 5.2% had someone living alone who was 65 years of age or older. The average household size was 2.61 and the average family size was 3.01.

Conway is a member of Frontier Regional and Union 38 School Districts, which also includes Deerfield, Whately and Sunderland. Each town operates its own elementary school, with Conway Grammar School serving the town's students from kindergarten through sixth grades. All four towns send seventh through twelfth grade students to Frontier Regional High School in Deerfield. There are several private, religious and charter schools located in the Greenfield and Deerfield area, with the nearest being the Deerfield Academy.

All content from Kiddle encyclopedia articles (including the article images and facts) can be freely used under Attribution-ShareAlike license, unless stated otherwise. Cite this article:
Conway, Massachusetts Facts for Kids. Kiddle Encyclopedia.