Hawley is a town in Franklin County, Massachusetts, United States. The population was 353 at the 2020 census. It is part of the Springfield, Massachusetts Metropolitan Statistical Area.

Hawley was first settled in 1760 as Plantation Number 7, by a group from Hatfield. The town was called the "Hatfield Reserve" until it was officially incorporated in 1792. The town was named for Joseph Hawley of Northampton, a local leader in the American Revolution. Hawley's main industries were forestry and, eventually, recreation. The town originally included the land of its neighbor, Plainfield, which split off in the early nineteenth century.

Today, the town has very little industry. There are a few remaining farms, artisans and small businesses, though most people commute from the town, work from home or work for municipalities. The town has no gas stations, convenience stores, or liquor stores. Hawley does not have a police department, but does have a fire department.

According to the United States Census Bureau, the town has a total area of 30.9 square miles (80 km2), of which 30.9 square miles (80 km2) is land and 0.04 square miles (0.10 km2) (0.06%) is water. The town is located at the southwest corner of Franklin County, with Hampshire County to the south and Berkshire County to the west. The town is bordered by Charlemont to the north, Buckland to the east, Ashfield to the southeast, Plainfield to the south, and Savoy to the west. Hawley is located 22 miles (35 km) west of Greenfield, 45 miles (72 km) north-northwest of Springfield, and 110 miles (180 km) west-northwest of Boston.

Hawley is located among the northern Berkshires, with the northern edge of town falling to the valley of the Deerfield River. Several brooks and the Chickley River flow into the river through town. The town is home to Hawley Bog, one of the few bogs in Massachusetts to be preserved in its natural state. There are several small peaks in town, with the highest being Parker Hill to the south. The hill lies within Kenneth Dubuque Memorial State Forest, which has several recreation sites for all seasons. Mohawk Trail State Forest also extends into the town from Charlemont and Savoy, in the northwest corner of town. Between the two forests lies Stump Sprout Cross-Country Ski Area, which also provides other recreational activities off-season. A portion of Berkshire East Ski Area also lies within town, with the base of the area being in Charlemont.

The main road through town is Massachusetts Route 8A, which connects Route 116 to the south with Route 2 to the north. Route 2, the Mohawk Trail, passes just north of the town line for most of the town border. The nearest interstate, Interstate 91, can be accessed in nearby Greenfield. There is no rail, air or bus service in town. The town is roughly equidistant from the two nearest points for rail and air service, Greenfield and North Adams. The nearest Amtrak service is in Pittsfield, and the nearest national air service is at Bradley International Airport in Windsor Locks, Connecticut.

There were 137 households, out of which 29.9% had children under the age of 18 living with them, 62.0% were married couples living together, 6.6% had a female householder with no husband present, and 27.7% were non-families. 21.2% of all households were made up of individuals, and 6.6% had someone living alone who was 65 years of age or older. The average household size was 2.45 and the average family size was 2.85. 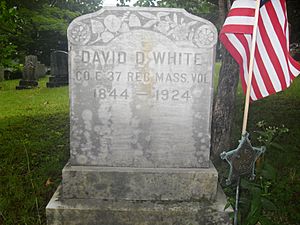 Hawley and neighboring Charlemont make up the Hawlemont Regional School District, a sub-district of the nine-town Mohawk Trail Regional School District, which serves much of western Franklin County. Town students attend the Hawlemont Regional Elementary School in Charlemont from pre-kindergarten through sixth grades, and all students in the district attend Mohawk Trail Regional High School in Buckland. There is a private academy, the Academy at Charlemont, in Charlemont as well, and other private and religious schools are in nearby towns.

David Dunnels White, Medal of Honor nominee, for the capture of Major General Custis Lee, son of Robert E. Lee, at the Battle of Sailors Creek, Virginia, April 6, 1865. He is buried in the Bozrah cemetery in East Hawley.

All content from Kiddle encyclopedia articles (including the article images and facts) can be freely used under Attribution-ShareAlike license, unless stated otherwise. Cite this article:
Hawley, Massachusetts Facts for Kids. Kiddle Encyclopedia.