Kids Encyclopedia Facts
This page is about the mountain in Washington. For the summit in Missouri, see Buckner Mountain (Missouri).

The mountain has two summits of nearly the same elevation, separated by a ridgeline of a few hundred feet. Sources differ over the exact height of the southwestern summit. The current United States Geological Survey quadrangle shows the southwest summit to have an elevation between 9080 and 9119 feet. According to Peakbagger.com the southwestern peak is the higher one, at 9,114 ft (2,778 m), based on Edward Earl's pixel analysis of the height of the peak as derived from a digital photograph. The broader northeastern peak is agreed to be 9,112 ft (2,777 m). Noted climber Fred Beckey also claims in his Cascade Alpine Guide books that the Southwest summit is two feet higher but gives no source for the claim and this approximation is second-hand since Beckey has never summitted Buckner. Most mountain climbers visit the southwest peak since it is arrived at first via the standard Horseshoe Basin route.

Buckner Mountain is located on the border between Chelan and Skagit counties. It is connected to Horseshoe Peak, Boston Peak, and Sahale Mountain to the west by Ripsaw Ridge, which marks the county line for several miles. Cascade Pass is located a few miles south of Sahale Mountain. Boston Glacier, the largest glacier of the North Cascades, covers the entire region north of Ripsaw Ridge. South of Ripsaw Ridge the terrain slopes down into the vast Horseshoe Basin, from which some the headwater tributaries of the Stehekin River flow. Long high ridges extend from Buckner Mountain east to Park Creek Pass, and south to Booker Mountain and Park Creek Ridge. Other glaciers near Buckner Mountain include Thunder Glacier, to the north, and Buckner Glacier, to the south.

Buckner Mountain is named for Henry Freeland Buckner, who in the early 20th century managed a mining company which had claims in Horseshoe Basin, southwest of the peak. 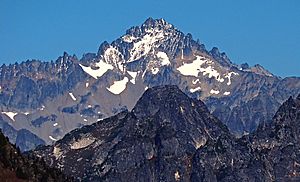 Buckner Mountain is located in the marine west coast climate zone of western North America. Most weather fronts originate in the Pacific Ocean, and travel northeast toward the Cascade Mountains. As fronts approach the North Cascades, they are forced upward by the peaks of the Cascade Range, causing them to drop their moisture in the form of rain or snowfall onto the Cascades (Orographic lift). As a result, the west side of the North Cascades experiences high precipitation, especially during the winter months in the form of snowfall. During winter months, weather is usually cloudy, but, due to high pressure systems over the Pacific Ocean that intensify during summer months, there is often little or no cloud cover during the summer. Because of maritime influence, snow tends to be wet and heavy, resulting in avalanche danger. 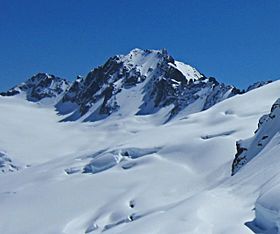 North face of Buckner from the Boston Glacier

Buckner Mountain is one of the more accessible high peaks of Washington, being located just east of Cascade Pass and a well-maintained trail. Boston Glacier, on the mountains northern face, has become one of the best known ice climbs in the North Cascades.

All content from Kiddle encyclopedia articles (including the article images and facts) can be freely used under Attribution-ShareAlike license, unless stated otherwise. Cite this article:
Buckner Mountain Facts for Kids. Kiddle Encyclopedia.