Sahale Mountain is a jagged, glaciated mountain, in North Cascades National Park, in northern Washington state. The summit of Sahale Mountain is referred to as Sahale Peak. It is 0.3 miles (0.48 km) south of its higher neighbor, Boston Peak, and the saddle between the two is 80 feet (24 m) lower than Sahale's summit. Quien Sabe Glacier is to the west of the ridge between the two peaks while Davenport Glacier is in a cirque east of this ridge and above Horseshoe Basin. Sahale Glacier is south of the summit and east of Sahale Arm, a ridge that extends southwest from Sahale to Cascade Pass. The name Sahale may originate from a Northwest Native American word meaning "high place," "falcon," or "sacred."

Sahale Peak is noted for its panoramic views and is popular among mountaineers. The least technical route follows the Sahale Arm from the Cascade Pass Trail to the Sahale Glacier. From the glacier there is a class 3–4 climb to the summit. Another option is to traverse from the Sahale Arm onto the Quien Sabe Glacier and climb the glacier to the rock ridge north of the peak. The climb up this ridge is also class 3–4 but crosses some loose rock and is more exposed. Cascade Pass and the Sahale Arm can be reached from Marblemount to the west or from the east, it is accessible via a trail, from Stehekin, up the Stehekin River valley. 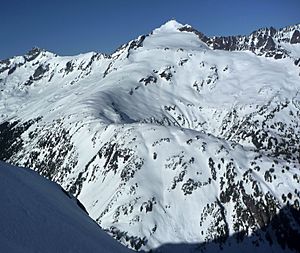 Sahale and Sahale Arm in winter

Sahale is located in the marine west coast climate zone of western North America. Most weather fronts originate in the Pacific Ocean, and travel northeast toward the Cascade Mountains. As fronts approach the North Cascades, they are forced upward by the peaks of the Cascade Range, causing them to drop their moisture in the form of rain or snowfall onto the Cascades (Orographic lift). As a result, the west side of the North Cascades experiences high precipitation, especially during the winter months in the form of snowfall. During winter months, weather is usually cloudy, but, due to high pressure systems over the Pacific Ocean that intensify during summer months, there is often little or no cloud cover during the summer. 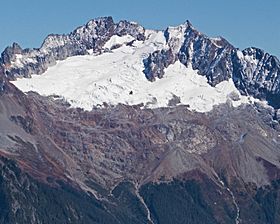 All content from Kiddle encyclopedia articles (including the article images and facts) can be freely used under Attribution-ShareAlike license, unless stated otherwise. Cite this article:
Sahale Mountain Facts for Kids. Kiddle Encyclopedia.