Alongside sister waterpark Adventure Island (30-acre (12 ha)), Busch Gardens is the anchor of Tampa's 365-acre (148 ha) amusement multiplex. Currently Busch Gardens competes with other such parks in Florida and charges comparable fees. The park is operated by SeaWorld Entertainment, majority owned by the private equity firm The Blackstone Group. Busch Gardens is currently accredited by the Association of Zoos and Aquariums (AZA). In 2015, the park hosted 4.2 million people, placing 11th as the most-visited theme parks in the United States.

Busch Gardens Tampa opened on March 31, 1959, as an admission-free hospitality facility for Tampa Anheuser-Busch; in addition to various beer tastings, they had a bird garden and the Stairway to the Stars, which was an escalator that took guests to the roof of the brewery.

Busch Gardens continued to grow, and in 1965, opened the 29-acre (12 ha) Serengeti Plains, which allowed the African wildlife to roam freely. It continued to focus on its tropical landscape, exotic animals, and amusements to draw visitors. Busch Gardens began charging admission as the entertainment became more complex, with extra fees for the thrill rides, such as the roller coasters for which Busch Gardens is now known. 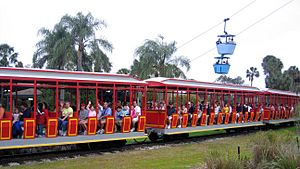 The park's main entrance. Treats can be purchased at the Sultan's Sweets and the Zagora Cafe. The Moroccan Palace is located here, as well as the outdoor Marrakesh Theater. Gwazi was the major ride in this area.

The original section of the park that opened back in 1959. The area for the most part remains mostly gardens and animal exhibits. A staple attraction that once stood in this section was the brewery. However, the brewery closed in 1995 and Gwazi now sits where the brewery was located. In 2014, the Bird Gardens theater was demolished, and the former show (Critter Castaways) is now housed in the Pantopia Theater under the new name "Opening Night Critters".

This section of the park is home to the park's water rides and SheiKra, which was the first and only Dive Coaster in the United States until the addition of Griffon at the sister park Busch Gardens Williamsburg. The section opened up in 1973 with the addition of the Stanley Falls Flume. The African Queen Boat Ride opened in 1977 as Busch's version of Disney's Jungle Cruise. The African Queen featured live animals, including alligators, crocodiles, rhinoceroses and spider monkeys. A colorful South American macaw rode on each boat as a first mate. There was also a cast member, dressed in African warrior regalia, who surprised each boat as it passed through a riverside village. The warrior was featured in television ads for the park in the early 1980s. In 1989, the African Queen Boat Ride was transformed into Tanganyika Tidal Wave with the addition of a 55-foot (17 m) drop that generates a giant splash. The section remained unchanged from then until 2005, when SheiKra opened, and the surrounding area was renovated. 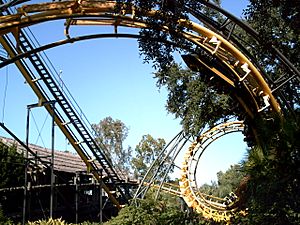 This section, themed to the jungles of Congo, contains two of the park's most popular rides, Kumba and Congo River Rapids. In November 2006, Congo underwent major renovation, including the removal of the park's classic Python roller coaster.

Opened on April 5, 2008, Jungala is a 4-acre (16,000 m2) family attraction featuring up-close animal encounters, rope bridges to explore three stories of jungle life, and a water-play area for children. Also located in this area are two family attractions: Jungle Flyers, a zip line that offers three different flight patterns above the treetops of the new area, and Wild Surge, a shot tower that launches guests above a waterfall. Another attraction is Tiger Trail, which is a walkthrough with tigers where there is also a glass turret where you can look out right in the middle of the tiger enclosure. During the Kareebu Jungala atmosphere show, stiltwalkers perform with puppets and interact with guests in the heart of Jungala.

A section originally themed after the malls and bazaars of Africa that opened up in May 1980 as Timbuktu. The Phoenix was built in 1984 and remains a popular ride to this day. The section was renovated in 2003. Important elements added during this facelift included the Timbuktu Theater, which replaced the park's Dolphin Theater with an indoor 4-D movie theater. The dolphins had retired to other locations. In 2004, Das Festhaus was transformed into the Desert Grill, and the park's family-friendly Sand Serpent wild mouse roller coaster opened, replacing the Crazy Camel flat ride. In September 2014, Falcon's Fury, a 335-foot drop tower, opened. This section of the park was re-themed to Pantopia alongside the opening of Falcon's Fury.

Alligators and crocodiles can be observed here up close. In Curiosity Cavern, guests can view mammal and reptile exhibits. Visitors to Nairobi can meet the Animal Ambassadors who travel the country and make educational appearances at Jambo Junction. The area also contains Myombe Reserve, a tropical rainforest that is home to Western lowland gorillas and common chimpanzees. In 2012 the Animal Care Center opened, allowing guests to observe actual veterinary procedures, as well as meet the start of Wildlife Docs, Busch Gardens' Saturday morning television show. The main train station at Busch Gardens is located at Nairobi. Another popular attraction here is the Asian elephant exhibit. 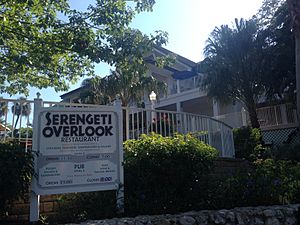 The Serengetti Overlook restaurant which replaced the Crown Colony restaurant in 2016. 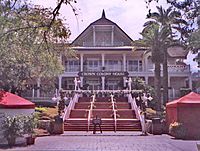 Crown Colony is the smallest section of the park. It features a restaurant, the Cheetah Hunt roller coaster, and the Skyride station.

Bedouin tents, authentic handicrafts and art create an Egyptian marketplace feel. The primary attraction of the Egypt-themed area is Montu, an inverted steel coaster. Tut's Tomb, a former audio guided walk-through tomb excavation closed in Winter 2013, and the interior was gutted to make way for the queue for Cobra's Curse. The former Golden Scarab Gift Shop will be converted into the gift shop you will enter as you exit the attraction.

The state-of-the-art facility that allows the Busch Garden visitors to view animal care being conducted from treatments to x-rays.

A free flight aviary that shows over 500 tropical birds from around the globe including parrots, flamingos, and much more.

In May 2011, Cheetah Run opened. Cheetah Run is home to Busch Gardens Tampa Bay collection of cheetahs. There are running demonstrations and Meet a Keeper sessions throughout the day. In addition, the exhibit has interactive screens with cheetah facts.

One of Cheetah Run's most notable residents is Kasi, a male cheetah, who was paired with Mtani, a female Labrador Retriever, from 2011 to 2013 when they were young. Mtani now lives with a zookeeper and Kasi has been paired with a female Cheetah. As of 2013, Busch Gardens has 14 cheetahs. 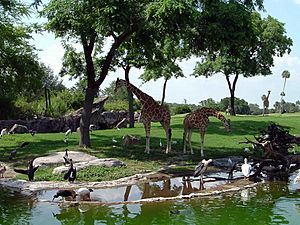 Giraffes at the "Edge of Africa" attraction

Opened in 1997, Edge of Africa is a walk-through attraction where guests can observe African animals. Among the exhibits are a Nile crocodile, meerkats, two prides of lions, a pack of spotted hyenas, two hippos, vultures, and a troop of lemurs.

The three newest members to the lion pride include a male lion named Kembe and two female sisters named Shaba and Shtuko. They arrived at the park as cubs in 2013 from a zoo in Africa.

A former exhibit in which you could see many types of animals, including Caribbean flamingos, lemurs, cuscuses, sloths, opossums, snakes and more.

Tree-top observation platforms to watch and interact with orangutans.

Observation areas, trails and a bridge to watch and interact with tigers. Busch Gardens has at least 10 tigers.

On March 31, 2013, Bzui, a female Malayan tiger, gave birth to three cubs sired by Mata. She had two males and one female. The males were named Bundar and Rukayah. The female was named Cinta.

An open aviary habitat that invites guest walk around and be visited by the gliding and flying lorikeets. Purchasing nectar is an optional part of the habitat, however provides a wonderful experience of hand-feeding the birds.

In 1965, the park opened its Serengeti Plain animal habitat, the first of its kind to offer animals in a free-roaming environment. Over the years, the habitat has expanded from 29 acres (12 ha) to its current size of 65 acres (26 ha). It is home to the Grévy's zebra, reticulated giraffe, addax, white rhinoceros, eland, impala, ostrich, and marabou stork.

Area to hand-feed kangaroos and free-roaming wallabies and to see other animals such as kookaburras, magpies, black swans and tawny frogmouths. A male kangaroo named Horatio arrived at the park in early 2014.

This cavern attraction, formerly known as Nocturnal Mountain, contains animals such as aardvarks, bats, snakes, lizards, tamarins, and sugar gliders in the low-light environment. This attraction offers the true facts about the creatures inside and cracks the myths about them wide open.

The Nairobi section of the park has five female and one male (arrived from the Calgary Zoo in 2013) Asian elephants. There are daily interactions at the Elephant Interaction and Husbandry Wall or during the Elephant Keeper Experience.

From January to March, Busch Gardens hosts a weekly concert series which invites popular bands either in big band music or pop to perform classic or contemporary songs.

(Previously called Bud & BBQ and Bands, Brew & BBQ) For the months of March & April, Busch Gardens hosts a series of concerts in Gwazi Field, mostly from classic rock and country music acts. Sometimes the event includes alternative rock, pop, hip hop and R&B acts as well as comedians. Also, there are special culinary offerings that include a variety of ethnic food and wine samplings from various local vendors along the walkway from the Gwazi Roller Coaster to the gate in Gwazi Field.

The documentary film Blackfish and a subsequent online petition led to several popular musical groups cancelling performances at SeaWorld and Busch Gardens "Bands, Brew & BBQ" event in 2014. This caused the removal of the event in Tampa, which was replaced by the annual Food and Wine Festival, resembling the one currently at Epcot in Walt Disney World Orlando.

In March, several Latin music acts are hosted on the stage in Gwazi Field. There is a similar culinary setup with special offerings for the concert days as there is for Bands, Brew & BBQ.

In the summer months, the park stays open later and includes concerts by performers like David Cassidy and Starship with Mickey Thomas. The park's Independence Day festivities add fireworks to the entertainment lineup.

From November to December, theaters throughout the park are transformed into Christmas-themed shows in celebration of the holiday season for an event called Christmas Town. The whole park is decorated with Christmas lights and theming. Among the more popular attractions is Snow World, in which guests can play in real snow and ride down ice slides. This event was first introduced in 2012.

During New Year's Eve, Busch Gardens celebrates the new year by hosting live music throughout the park, thrill rides opened through the night, and fireworks located at the Gwazi Field. Including a park wide countdown to the new year.

All content from Kiddle encyclopedia articles (including the article images and facts) can be freely used under Attribution-ShareAlike license, unless stated otherwise. Cite this article:
Busch Gardens Tampa Facts for Kids. Kiddle Encyclopedia.