The zoo opened in 1894 as a deer park and menagerie. In 1995 it was in deplorable condition and closed in 1998. It reopened in 2000 after major renovations. It is home to a variety of North American wildlife and it supports many conservation programs, such as the Cape Cod Stranding Network. 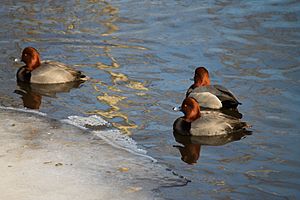 The City of New Bedford owns and operates the zoo. The City of New Bedford funds staffing, operation, maintenance and capital improvements to facilities. Approximately $7,000,000 in Capital Improvement Program (CIP) bonds have been designated between 2014-2019 to update the facilities. Another $4,000,000 was funded by the Commonwealth of Massachusetts in 2018 for further improvements.

In 1969, the Buttonwood Park Zoological Society (BPZS), a private, nonprofit corporation, was founded to run concessions such as a pony ride and train, and to fundraise for the zoo. In the past five years, BPZS has begun contributing more to the support of the zoo, managing the website, membership funding, and community events at the zoo.

Buttonwood Park Zoo was called "one of the finest small zoos in the United States" by the American Zoo and Aquarium Association in 2003. 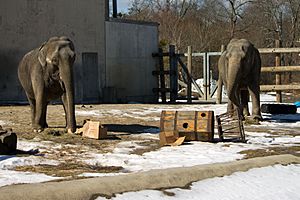 The two Asian elephants, Ruth and Emily, during their feedtime.

The zoo houses over 200 animal species from around the world. Exhibits feature animals from the barnyard as well as the wild.

The exhibits are categorized into five main areas:

The Wildlife Education Center is an educational building at the heart of the zoo. It contains two classrooms which host educational programs and business and private meetings.

Annual events at the zoo include "Boo at the Zoo", "Holiday Lights", "Cabin Fever Week", and "Spring Fling Week".

All content from Kiddle encyclopedia articles (including the article images and facts) can be freely used under Attribution-ShareAlike license, unless stated otherwise. Cite this article:
Buttonwood Park Zoo Facts for Kids. Kiddle Encyclopedia.