Caerfai Bay near St Davids in Pembrokeshire, West Wales has cliffs of purple sandstone and a sandy beach at low tide reached by steep steps. The beach is situated in the Pembrokeshire Coast National Park and on the Pembrokeshire Coast Path and has rugged coastal scenery with the path winding up and down the cliffs. There is free parking above the beach with picnic benches and views of the islands of Penpleidiau, Skomer and Skokholm.

Caerfai Bay Caravan and Tent Park which started in the 1930s is open between March and November and has static hire, touring and camping pitches which overlook Caerfai Bay. Caerfai Farm is 140 acres (0.57 km2) producing organic milk, cheeses and potatoes using sustainable energy sources, including solar, geothermal, wind and biomass energy. The farm also has a seasonal shop and a campsite. 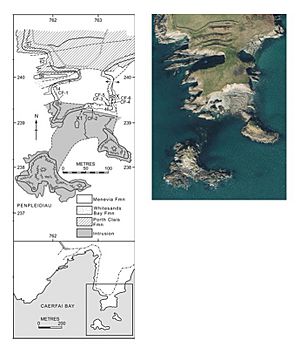 Both western and eastern cliff sections display distinctive red, purple and greenish mudstone and sandstone formations representing the Caerfai and Porth-y-rhaw Groups of lower to middle Cambrian age. The southern tip of the eastern Penpleidiau headland and its small islets are composed of an Intrusive igneous rock known as felsite. the intrusion is in sharp contact with baked fossiliferous Middle Cambrian (Drumian) mudstones of the Menevia Formation and the Tomagnostus fissus Biozone of Scandinavian biostratigraphic terminology (Rees et al., op. cit.). There are disused quarries below the car park and at Caer Bwdy Bay which provided stone in the original construction of St Davids Cathedral and recent renovation on the structure.

All content from Kiddle encyclopedia articles (including the article images and facts) can be freely used under Attribution-ShareAlike license, unless stated otherwise. Cite this article:
Caerfai Bay Facts for Kids. Kiddle Encyclopedia.