Cajeta is a confection of thickened caramel usually made of sweetened caramelised goat's milk. It is a type of dulce de leche. In Mexico, it is considered a specialty of the city of Celaya in the state of Guanajuato.

Cajeta is made by simmering goat's milk, or occasionally a sweetened liquid, stirring frequently, until its viscosity increases due to evaporation of water, and it becomes caramelized. While goat milk is the most usual base, other liquids or juices may be used.

In Celaya, and eventually the rest of Mexico, the confection of half goat's milk and half cow's milk became known by the name cajeta. Elsewhere, the milk candy is known as leche quemada or dulce de leche. It has analogues in the many Indian milk-based sweets, such as pera and milk fudge burfi, and in the opera fudge of the United States. Cajeta is eaten on its own as a sweet; as a spread or filling for breads and pastries, such as churros; and as a topping for ice cream.

Certain liquors are added to special recipes called cajeta envinada. In addition, cajeta envinada especial is enriched with raisins, almonds, pecans or nuts. Often it is used as a topping for crêpes, as a sweet sauce boiled and softened down with milk to soak the crepes, resulting in a tasty dessert. It is also common to place cajeta between obleas to make a traditional Mexican candy. 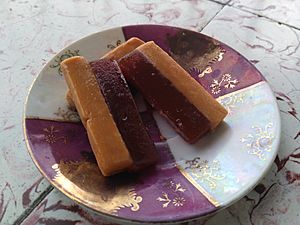 Typical cajeta made of Quince and Psidium.

In September, 2010, cajeta was declared the Bicentennial Dessert of Mexico, honouring its history, tradition and origin. Cajeta was born in the city of Celaya, Guanajuato, the state where the Independence of Mexico started back in 1810, with the famous Grito de Dolores by father Miguel Hidalgo. In Celaya, Hidalgo was named Captain General of America by his staff, making it an important element of the Independence War. Cajeta was easily stored and transported, and lasted for several months without decomposing, thus becoming an important food complement for the poorly fed troops.

All content from Kiddle encyclopedia articles (including the article images and facts) can be freely used under Attribution-ShareAlike license, unless stated otherwise. Cite this article:
Cajeta Facts for Kids. Kiddle Encyclopedia.