Canby is a city in Clackamas County, Oregon, United States. The population was 15,829 at the 2010 census. It is along Oregon Route 99E, 2 miles (3 km) northeast of Barlow. In May 2016 Canby was featured on ABC's series 20/20 (U.S. TV series), for its very own Canby Psychic being part of an investigation of swindling a local rancher of $15 million.

Canby is named for Edward Richard Sprigg Canby, a Civil War general who was later killed in the Modoc War by Captain Jack and his group of warriors.

The area was known as Baker Prairie when the community was founded in 1857. Canby was platted in 1870. Canby was incorporated by the Oregon Legislative Assembly on February 15, 1893.

Entering Canby from the north brings visitors past the Willamette River, and from the south through the historic community of Aurora. The Molalla River passes by the southern and western border of the city.

This region experiences warm (but not hot) and dry summers, with no average monthly temperatures above 71.6 °F (22.0 °C). According to the Köppen Climate Classification system, Canby has a warm-summer Mediterranean climate, abbreviated "Csb" on climate maps.

There were 5,647 households of which 39.5% had children under the age of 18 living with them, 57.4% were married couples living together, 11.1% had a female householder with no husband present, 4.6% had a male householder with no wife present, and 26.9% were non-families. 22.3% of all households were made up of individuals and 12.9% had someone living alone who was 65 years of age or older. The average household size was 2.79 and the average family size was 3.27.

There were 4,489 households out of which 40.6% had children under the age of 18 living with them, 60.3% were married couples living together, 10.4% had a female householder with no husband present, and 25.0% were non-families. Households made up of individuals represented 21.2% of all households and 11.0% of all households had someone living alone who was 65 years of age or older. The average household size was 2.83 and the average family size was 3.27.

The city's library is part of the Library Information Network of Clackamas County.

Canby is home to the Canby Depot Museum and Hart's Reptile World. 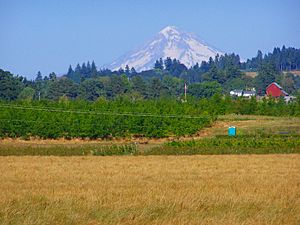 Mount Hood, as seen from the Molalla Forest Road in Canby, between Southeast 13th St. and Southeast Township Road

The Union Pacific (formerly a Southern Pacific mainline) freight and passenger (via Amtrak) line runs through the center of downtown Canby although Amtrak passenger trains no longer stop here.

Since 2002, the city has operated its own bus system, Canby Area Transit (CAT). CAT buses do not run on weekends or major holidays. The service connects with the Portland area's TriMet at the Oregon City Transit Center and with the Salem-Keizer Transit (Cherriots) bus system in Woodburn. Canby is also served by one route of South Metro Area Regional Transit (SMART), the bus division of the City of Wilsonville. Prior to 2002, Canby was included within the TriMet district, and that agency was the sole provider of transit service in Canby. In late 2001, TriMet approved a request by Canby to withdraw from the TriMet district and initiate its own transit service.

The east-west streets are generally numbered avenues, with Oregon Route 99E being SE and SW 1st Avenue. North-south streets are named streets. Many of their names are types of trees, and they run in alphabetical order from west to east, starting at the Molalla River. Within the city limits, addresses always include a quadrant designation, except for Ivy St, which only includes N or S.

Canby is close to the Aurora State Airport and the Portland-Mulino Airport, both of which are both served by general aviation only.

Canby features a paved road which is closed to automobile traffic, the Molalla Forest Road. This road was formerly a private road used by logging trucks, but is now used primarily by bicyclists and pedestrians.

All content from Kiddle encyclopedia articles (including the article images and facts) can be freely used under Attribution-ShareAlike license, unless stated otherwise. Cite this article:
Canby, Oregon Facts for Kids. Kiddle Encyclopedia.