Kids Encyclopedia Facts
This page is about the parkway in California. For the park in Washington, D.C., see National Mall. For the shopping malls in Olympia, Washington, and Jefferson City, Missouri, respectively, see Capital Mall and Capital Mall (Missouri). 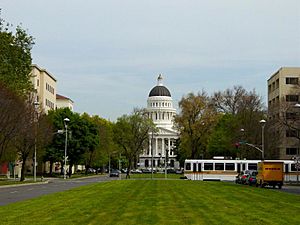 Eastward view of the Capitol Mall, with the California State Capitol terminus

The Capitol Mall or Capitol Mall Boulevard is a major street and landscaped parkway in the state capital city of Sacramento, California. It connects the city of West Sacramento in Yolo County to Downtown Sacramento. Capitol Mall begins at the eastern approach to the Tower Bridge, and runs east to 10th Street and the California State Capitol.

Capitol Mall begins at the eastern end of Tower Bridge, which crosses the Sacramento River to West Sacramento. It runs eastward past the Riverfront Promenade park, and over the Interstate 5 to the 1860s landmark California State Capitol building and parks. There is no direct connection to Interstate 5, so drivers will have to use other routes.

Some of Sacramento's major businesses and law firms are located on the Capitol Mall. Due to Sacramento's street grid system downtown, Capitol Mall would theoretically be called "M Street" if it used the gird system's conventions.

The Capitol Mall was previously part of State Route 275, but was relinquished to the city in January 2006. 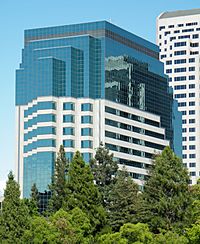 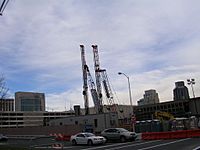 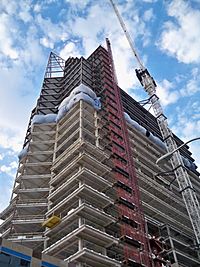 Landmarks on the Capitol Mall, from the west (Tower Bridge and Sacramento River) to the east (California State Capitol), include:

Located at 1 Capitol Mall, Drexel University Sacramento is the California campus of renowned Drexel University, based in Philadelphia. It is located near the iconic Tower Bridge, between the Sacramento River and the Mall's crossing over Interstate 5.

Located at the gateway to downtown, the busy intersection of 3rd Street and Capitol Mall, 300 Capitol Mall stands 18 stories high with 383,238 square feet of rentable area. The tower was designed by Daniel, Mann, Johnson & Mendenhall (DMJM) and completed in 1984.

301 Capitol Mall is the site of the former home of the Sacramento Union newspaper. Construction began here in 2006 for The Towers on Capitol Mall I & II, two planned 53-story and massive 615 feet (187 m) mixed-use towers. The project had been on hold since January 2007 due to liens being filed against developer.

Located at 400 Capitol Mall, the 'Wells Fargo Center' is currently the tallest building in Sacramento. It is 429 feet (131 m) high, and has 33 stories, with 29 above the ground floor lobby and 3 below. The skyscraper won the BOMA Building of the Year award in 1994. A museum is located in the lobby, dedicated to the history of Wells Fargo Bank in the Sacramento area. Located within the Wells Fargo Center: Il Fornaio, a popular restaurant; and Price Waterhouse Coopers, a major tenant.

500 Capitol Mall, also known as the 'Bank of the West Tower', is a 25-story 433,508-square-foot (40,274.2 m2) high-rise on Capitol Mall in downtown Sacramento with a 10-level, 800 stall parking garage. The building consists of a 5-story atrium/lobby, ground floor retail, office space, and a 2-level penthouse restaurant or meeting facility. The structure has a steel frame and features a granite curtain wall with stone-on-precast and stone-on-truss panels on the exterior. The building, opened for business and welcomed its first tenant on May 26, 2009. 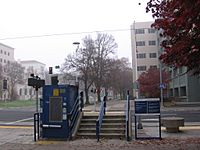 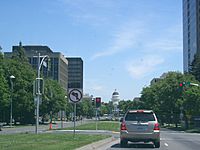 Sacramento Regional Transit District—RT serves public transport to/from and along the Capitol Mall. RT serves the city of Sacramento, and much of the northern portion of Sacramento County.

There are also bus stops located on the Capitol Mall operated by RT, with service between 5:00 a.m. and 9:00 p.m. daily. The bus fleet is powered by compressed natural gas.

All content from Kiddle encyclopedia articles (including the article images and facts) can be freely used under Attribution-ShareAlike license, unless stated otherwise. Cite this article:
Capitol Mall Facts for Kids. Kiddle Encyclopedia.