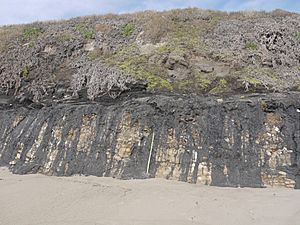 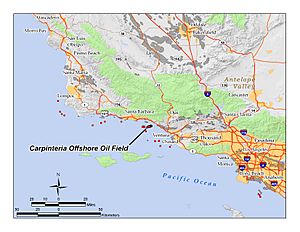 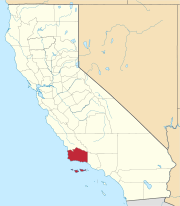 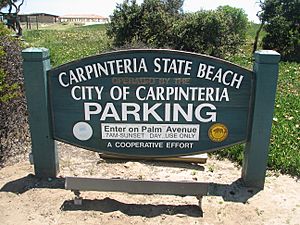 The Carpinteria Tar Pits are a natural asphalt lake areas similar to Tierra de Brea Trinidad and Tobago, Lake Guanoco in Venezuela and the La Brea Tar Pits (Los Angeles) and McKittrick Tar Pits (McKittrick) both also located in the US state of California.

The area is a designated park, the Tar Pits Park, and lies within the Carpinteria State Beach area in the southern part between the Santa Rosa and the San Miguel campsites. Most of the tar pits are located along a short stretch directly on the beach and generate from the underlying Carpinteria Offshore Oil Field.

The Carpinteria Tar Pits probably date from the Pleistocene epoch.

The creation of an asphalt lake is typically the result of upwards migrations of hydrocarbons along a geologic fault. Additionally, in connection with subduction pressure can be created against underlying oil source rock.

The oil is moving towards the surface and slowly transforming into bitumen; and, on the way through the lithosphere, it is picking up clay and water and is cooled into asphalt.

The Carpinteria Tar Pits were known to the local Native American Chumash people, who mined the asphalt and used it as a sealant for waterproofing their tomols (plank-built boats) and other purposes.

The area was named "La Carpinteria" (the carpentry) by a Spanish expedition under explorer Gaspar de Portolà, which arrived in the area on August 17, 1769. Starting around 1915, the tar pits were mined and the asphalt was used for building a coastal highway. In 1933, the area was designated a state beach and in 1941 it was formally opened to the public.

The tar pits have trapped and preserved hundreds of Pleistocene Age birds and animals. Some findings are on display at the Carpinteria Valley Museum of History, but no paleontological studies have been conducted because the tar pits were used as a local rubbish dump.

All content from Kiddle encyclopedia articles (including the article images and facts) can be freely used under Attribution-ShareAlike license, unless stated otherwise. Cite this article:
Carpinteria Tar Pits Facts for Kids. Kiddle Encyclopedia.