Castle Hill (Virginia) is an historic, privately owned, 600-acre (243 ha) plantation located at the foot of the Southwest Mountains in Albemarle County, Virginia, near Monticello and the city of Charlottesville, and is recognized by the Virginia Landmarks Register and the National Register of Historic Places. Castle Hill was the beloved home of Dr. Thomas Walker (1715–1794) and his wife, Mildred Thornton Meriwether (widow of Nicholas Meriwether III). Walker was a close friend and the physician of Peter Jefferson, and later the guardian of young Thomas Jefferson after his father's death.

Through his marriage to Mildred Meriwether in 1741, Thomas Walker acquired the land comprising approximately 15,000 acres (6,100 ha) which would become the site for Castle Hill. In its square hall, the youthful, music-loving Jefferson once played the violin, while the still younger Madison danced. Here in 1781, Walker's wife delayed the British Colonel Banastre Tarleton to give the patriot Jack Jouett time to warn Governor Thomas Jefferson and the Virginia legislators of Tarleton's plan to capture them.

The Walkers' youngest son, Francis Walker (1764–1806), married Jane Byrd Nelson, the daughter of Governor Thomas Nelson of Yorktown, and inherited Castle Hill. The estate was next inherited by Thomas & Mildred Walker's granddaughter, Judith Page Walker (1802–1882), who married U. S. Senator William Cabell Rives (1793–1868). William Cabell Rives studied law under Thomas Jefferson at Monticello, and was a friend of James Madison. At Castle Hill, Rives wrote a three-volume biography on Madison, entitled The Life and Times of James Madison (Little Brown & Co., Boston, 1859, 1866, 1868). A close friend of Dolley Madison, Judith Rives authored the novel Home and the World (D. Appleton and Company, New York, 1857), in which she wrote of life at Castle Hill as the fictitious “Avonmore.” 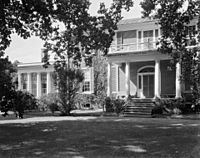 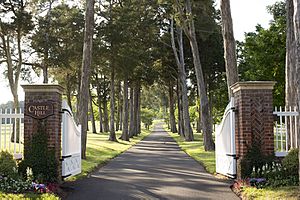 In the early 20th century, Amélie's sister, Mrs. Gertrude Rives Potts, who managed the estate after their father's death, was recognized as the first woman Master of Foxhounds. While at Castle Hill, Gertrude imported and trained a pack of English Foxhounds, bred and schooled her own horses, organized a hunting staff, and enlisted the consent of neighboring landowners to form a suitable country for the “Castle Hill Hounds.” Castle Hill later became part of the Keswick Hunt Club district. 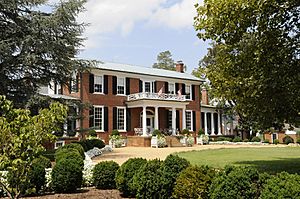 The original clapboard, colonial residence was built by Walker in 1764, with a front porch facing west and six dormer windows. William and Judith Rives added the brick, federal style addition to the home in 1824, which was built by Captain John Perry, one of Thomas Jefferson's master brickmasons. In 1844 the home's columned conservatories were added to each end of Perry's addition by another Jefferson brickmason, William B. Phillips. 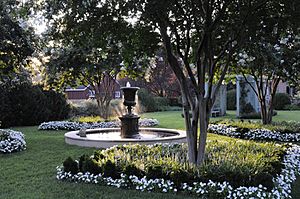 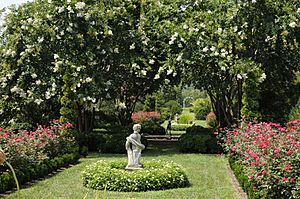 The Gardens at Castle Hill

Castle Hill's formal gardens were featured in an article written by Gertrude Potts published in the Historic Gardens of Virginia (The James River Garden Club, Richmond, 1923). The great box-hedges which stand at the top of the gardens are considered to be some of the tallest and most impressive boxwood in Virginia. The current expanded, multi-terraced and symmetrical formal gardens were designed in 1997 by Landscape architect Rachel M. Lily.

Castle Hill is a private residence.

All content from Kiddle encyclopedia articles (including the article images and facts) can be freely used under Attribution-ShareAlike license, unless stated otherwise. Cite this article:
Castle Hill (Virginia) Facts for Kids. Kiddle Encyclopedia.