The cathedral is in downtown Washington at 1725 Rhode Island Avenue NW between Connecticut Avenue and 17th Street. The closest Metrorail station is Farragut North, on the Red Line. It is seven blocks north and two blocks west of the White House.

St. Matthew's is dedicated to the Apostle Matthew, who among other things is patron saint of civil servants, having himself been a tax collector. It was established in 1840 by pastor Father William Matthews and parochial vicar Father John Philip Donelan. The church was dedicated on November 1, 1840, though the structure had not yet been entirely completed. Originally located at 15th and H Streets, construction of the current church began in 1893, with the first Mass being celebrated June 2, 1895. Construction continued until 1913 when the church was dedicated. In 1939, it became the cathedral for the newly established Archdiocese of Washington.

The structure is constructed of red brick with sandstone and terra cotta trim in the Romanesque Revival style with Byzantine elements. Designed by architect C. Grant La Farge, it is in the shape of a Latin cross measuring 155 ft × 136 ft (47 m × 41 m) and seats about 1,200 persons. The interior is richly decorated in marble and semiprecious stones, notably a 35 ft (11 m) mosaic of Matthew behind the main altar by Edwin Blashfield. The cathedral is capped by an octagonal dome that extends 190 ft (58 m) above the nave and is capped by a cupola and crucifix that brings the total height to 200 ft (61 m). Both structural and decorative elements underwent extensive restoration between 2000 and September 21, 2003, the feast day of St. Matthew. 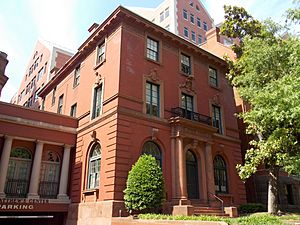 The first notable funeral Mass offered at St. Matthew's was for Manuel L. Quezon, the president of the Philippines, who died August 1, 1944, and was interred at Arlington National Cemetery until the end of World War II. In 1957, a Solemn Requiem Mass was offered at the cathedral for the funeral of Senator Joseph McCarthy; the liturgy was attended by 70 senators and hundreds of clergymen and it was filled to capacity.

The cathedral drew worldwide attention following the assassination of United States President John F. Kennedy on Friday, November 22, 1963 in Dallas, Texas. Richard, Cardinal Cushing, Archbishop of Boston and a Kennedy family friend, offered a recited (not sung) Pontifical Requiem Low Mass during the state funeral on Monday, November 25, 1963, which was followed by the procession to Arlington National Cemetery in Virginia for the burial. 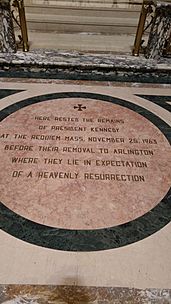 Commemoration of where John F. Kennedy's Casket was Placed for His Requiem Mass.

Other notable events at the cathedral include a Mass celebrated by Pope John Paul II during his 1979 visit to Washington, D.C., and the 1997 funeral of U.S. Supreme Court Associate Justice William J. Brennan, Jr.

The cathedral was the site of a Lutheran funeral service for Chief Justice William Rehnquist on September 7, 2005.

St. Matthew's is the location for one of the most famous Red Masses in the world. Each year on the day before the term of the Supreme Court of the United States begins, Mass is celebrated to request guidance from the Holy Spirit for the legal profession. Owing to the Cathedral's location in the nation's capital, the Justices of the Supreme Court, members of Congress and the Cabinet, and many other dignitaries (including, at times, the President of the United States) attend the Mass. Dwight Eisenhower became the first to attend as president in 1954; Harry Truman attended nine years earlier, but as vice president.

In 2020. St. Matthew's hosted its first Archdiocesan Easter Mass since the larger Basilica of the National Shrine of the Immaculate Conception was dedicated 1959. The mass, televised on EWTN and on livestream, was celebrated by Archbishop Wilton Gregory in front of an empty cathedral because of the threat of COVID-19. 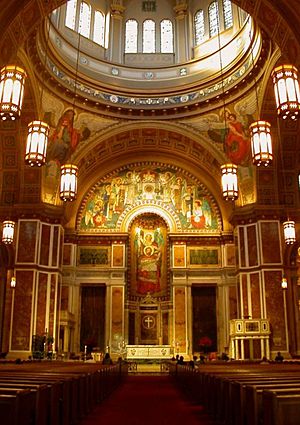 All content from Kiddle encyclopedia articles (including the article images and facts) can be freely used under Attribution-ShareAlike license, unless stated otherwise. Cite this article:
Cathedral of St. Matthew the Apostle (Washington, D.C.) Facts for Kids. Kiddle Encyclopedia.