The Cathedral of the Incarnation is an Episcopal Cathedral in Garden City, New York. It is the seat of the Episcopal Diocese of Long Island.

Built to the memory of Alexander Turney Stewart, the Cathedral of the Incarnation is the only cathedral in the United States funded by a single person, and the only one that is built in memory of a single individual. The cathedral is a product of Gothic Revival architecture. 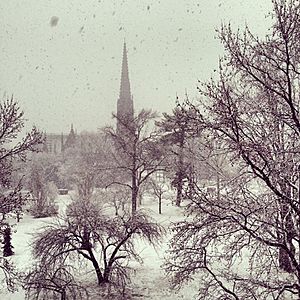 A view of the Cathedral of the Incarnation from the Bishop's Mansion in a snowstorm.

The Cathedral is historically known for its music ministry, led by Canon Lawrence Tremsky (Northwestern University, M.M.). The Men & Boys Choir, which originated during the 19th century, was the reason that the train station in this area was initially constructed - to transport the boys from their homes in Brooklyn or Manhattan to rehearsals and services. During the 1930s, the Cathedral formed the first American cathedral girls' choir - known as the Schola Cantorum. The choirs sing a repertoire of choral music, from plainsong to modern works, selected carefully to coincide with the themes of the season. Evensong is sung on the first Sunday of each month in the traditional English cathedral model (Magnificat, Nunc Dimittis, an anthem, and Anglican Chant Psalms). Special seasonal liturgies include traditional "Lessons & Carols" one or two Sundays before Christmas. 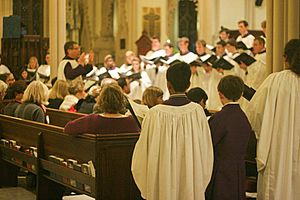 The Cathedral is notable for its stained glass windows and icons. The Mural Ikon of Pantokrator, permanently installed at the Cathedral, was crafted by American iconographer Guillermo Esparza.

A new organ was constructed by the firm Casavant Frères Limitée in 1986 on the 110th Anniversary of the passing of Mr. Stewart.

Tours are offered upon request, as well as the Cathedral being open from 9 AM to 4 PM (Tuesday - Friday).

All content from Kiddle encyclopedia articles (including the article images and facts) can be freely used under Attribution-ShareAlike license, unless stated otherwise. Cite this article:
Cathedral of the Incarnation (Garden City, New York) Facts for Kids. Kiddle Encyclopedia.