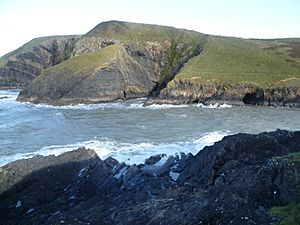 Ceibwr Bay, looking north across the entrance to Ceibwr Cove 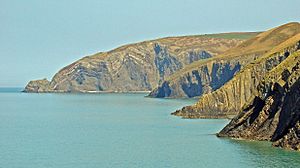 The elevated landscape at Ceibwr Bay is made up of spectacular cliff folds, part of the Nant Ceibwr valley leading through the village of Moylegrove, originally formed by glacial erosion. The river runs out into the Irish Sea through Ceibwr Bay. 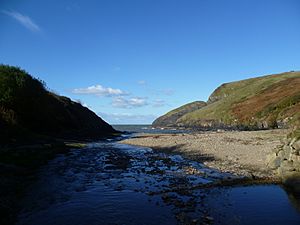 Ceibwr Bay is in the Pembrokeshire Coast National Park and is owned by the National Trust. The landscape is a significant bird habitat (gulls, fulmar, shag, cormorant and chough) and its natural environment and geological features attract visitors all year round. Accessed by the Pembrokeshire Coast Path (part of the Wales Coast Path), its cliff-top walks are not recommended for sufferers of vertigo, but there are picnic areas. From the cliff path, it is possible to observe bottlenose dolphins and Atlantic grey seals.

To the south of the bay is the Witches' Cauldron (Pwll-y-wrach), a collapsed cave. Ceibwr Cove has a small stony beach beside the outflow of Nant Ceibwr and was once a port serving Moylegrove and the surrounding area.

All content from Kiddle encyclopedia articles (including the article images and facts) can be freely used under Attribution-ShareAlike license, unless stated otherwise. Cite this article:
Ceibwr Bay Facts for Kids. Kiddle Encyclopedia.