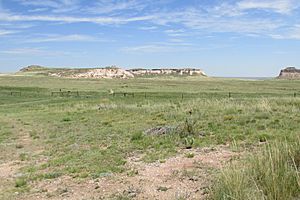 The Chalk Bluffs is a barren chalk escarpment in the northeastern part of the U.S. state of Colorado, stretching from the Wyoming border east of I-25 to near the South Platte River in Logan County and Weld County.

Most of the escarpment lies within the Pawnee National Grasslands.

As the bluffs are primarily barren and protected from fire. However trees normally found in the foothills of the Rocky Mountains are found there, including: Ponderosa pine, Rocky Mountain juniper, limber pine, and mountain mahogany.

Numerous raptors nest on the cliffs including Swainson's hawks, ferruginous hawks, golden eagles, and prairie falcons. The bluffs are a favorite site for birdwatching. It has been recognized by the National Audubon Society as a site of "global importance".

The bluffs are adjacent to the Cedar Creek Wind Farm.

All content from Kiddle encyclopedia articles (including the article images and facts) can be freely used under Attribution-ShareAlike license, unless stated otherwise. Cite this article:
Chalk Bluffs Natural Area Facts for Kids. Kiddle Encyclopedia.