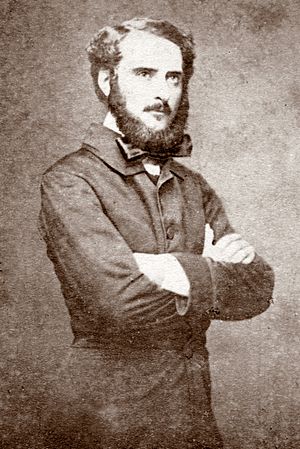 Charles Frederick Henningsen (1815 – 14 June 1877) was a writer, mercenary, filibuster, and munitions expert. He participated in civil wars and independence movements in Spain, Nicaragua, Hungary, and the United States.

Henningsen was born in Brussels. His father was John Henningsen (1775–1859), a native of Copenhagen, Denmark, and his mother was Louisa Burke (1789–1842), an Irish heiress. However, being adventurous in his youth, he revered Lord Byron in both literature and adventure, and so idealized British nobility in his actions. The family lived in Brussels from at least the time of his birth until the onset of the Belgian Revolution, fleeing due to their pro-Dutch sympathies. The family fled first to Paris, then to London. One of his sisters was Josephine Amelie de Henningsen (1822–1904), a member of the Missionary Sisters of the Assumption, who established the order in South Africa in 1849.

He fought in the First Carlist War, after entering as a volunteer in the service of Don Carlos in 1834. Henningsen rose to be captain of bodyguard to the Carlist general Tomás de Zumalacárregui. After the signing of the Lord Eliot Convention in April 1835, at which he was present, Henningsen returned to England.

However, Henningsen soon returned to Spain with the rank of lieutenant-colonel and joined the Carlist expedition that threatened Madrid from Aragon.

He fought at the Battle of Villar de los Navarros (24 August 1837), a Carlist victory, earning the rank of colonel. He headed the Carlist lancers and was attacked outside of Madrid by Liberal (Isabeline) forces. He led a column against these forces, capturing the outer fortifications of Madrid. He held them for several hours, until notified that Don Carlos could send him no reinforcements.

However, he was subsequently taken prisoner, and released on parole. He did not serve again in this war. He later recorded his experiences in Spain in the book The Most Striking Events of a Twelvemonth's Campaign with Zumalacarregui, which he dedicated to Lord Eliot. The work created controversy in Britain because it glorified Zumalacárregui and supported the Carlist position.

Henningsen subsequently fought against the Russian army in Circassia during the Russian-Circassian War, and wrote up a military report on Russia, also later writing the book Revelations of Russia. This was translated into French by Cyprien Robert and published in Paris (3 vols. 1845).

He proposed a military plan of campaign that was well received by Richard Debaufre Guyon and other leaders; as a result, Henningsen was to be appointed military and civil commander of the fortress of Komárom (Komorn). However, the Hungarian Revolution was suppressed, and Henningsen later visited Kossuth at Kütahya in 1850, where the Hungarian leader had been detained.

He then traveled from Constantinople to Albania, and then crossed the Adriatic Sea to Italy.

In 1851, Henningsen traveled to the United States shortly after Kossuth arrived in that country. He remained in the United States as a representative of Hungarian interests. He served under William Walker in Nicaragua from October 1856, and was appointed major-general, commanding Walker's artillery.

He commanded the Battle of Obraje and was second in command at the 3rd and 4th battles of San Jorge.

He was responsible for burning Granada, Nicaragua, at the time the capital of Nicaragua, on 14 December 1856. During this incident, he had taken refuge at Granada with 416 persons, 140 of whom were women, children, and wounded. He was surrounded by some 4,000 Salvadoran and Guatemalan troops, so he decided to burn the city, fighting his way to Lake Nicaragua with a loss of 230 killed, wounded, and those killed by cholera. Nothing of the city was left but a smoking ruin; when He withdrew, he left an inscription on a lance reading, in Spanish, Aquí fue Granada ("Here was Granada").

At the lake, he was joined by a reinforcement of 130 men, and routed the Salvadoran and Guatemalan forces.

On 1 May 1857 Henningsen, along with Walker, surrendered to Commander Charles Henry Davis of the United States Navy and was repatriated.

He became a citizen of the United States and was married to a niece of John M. Berrien, U.S. Senator from Georgia. Henningsen continued to pursue filibuster schemes and fought in the American Civil War for the Confederacy for a year, being made colonel (while still addressed as "General"), and frequently had command of the defenses of Richmond. He was involved in the Battle of Elizabeth City. However, disputes with the Confederate War Department and criticisms of President Davis effectively ended his military contributions. His wife, Wilhelmina "Willy" Henningsen (1820-1880) opened and operated a hospital (the Henningsen Hospital) in Richmond until 1863, when its operations were consolidated with the Louisiana Hospital. She was noted for the kindness and tenderness to the wounded and afflicted soldiers. After the war he took up his residence in Washington, D.C., and was involved in the movement to liberate Cuba from Spanish rule. During his declining years, he lived in straitened circumstances, but was supported by friends such as Colonel Albert Pike.

His 1877 obituary in The Evening Star described him as a "man of striking appearance, being tall, erect, and soldier-like in his bearing. He was gentleman of scholarly attainments, and spoke the French, Spanish, Russian, German, and Italian languages with the fluency of a native." Another source states that "he died in 1877 without ever winning any of the causes for which he fought."

He is mentioned in Ernesto Cardenal's poem Con Walker en Nicaragua ("With Walker in Nicaragua"):

And then came that Englishman, C. F. Henningsen,
who'd fought against the Czar and in Spain and for the independence of Hungary.

Henningsen's specialty was artillery, but he also wrote about the improvement of small arms, and superintended the development of the first Minié rifles in the United States.

All content from Kiddle encyclopedia articles (including the article images and facts) can be freely used under Attribution-ShareAlike license, unless stated otherwise. Cite this article:
Charles Frederick Henningsen Facts for Kids. Kiddle Encyclopedia.