Chebeague Island is an island town in Cumberland County, Maine, United States, located in Casco Bay, 10 miles (16 km) from Portland. These islands are sometimes referred to as an older, now archaic term "The Calendar Islands" because there was once a belief that the approximate number of islands was 365. The actual number is fewer than two hundred. Great Chebeague was a part of the town of Cumberland until July 1, 2007, when it became the town of Chebeague Island. As of the 2010 census, the town had a population of 341.

Two ferry services provide transportation to the island. The Chebeague Transportation Company (CTC) makes the 15-minute run from Wharf Road on Cousins Island, which in turn is connected by bridge to Yarmouth. Casco Bay Lines also provides service on all mail-boat and other "down-bay" trips that travel beyond Long Island.

According to island lore, the name "Chebeague" comes from a Native American word meaning "Island of Many Springs" (pronounced "sha-big"), as there are, indeed, many deep-running, underground fresh-water streams all over the island, in some places literally bubbling from the ground. Some Native Americans were still present after the European colonization of the area, as late as the 1870s.

The Native Americans did not dwell year-round on the island but paddled over by canoe during the summer months to fish. One can still notice areas of the island where clam shells are abundantly packed into the soil. This is mostly due to "shell piles" the Indians regularly made after their meals.

Original settlers in 1730 cleared much of the land for farming. Lobsters were so plentiful that they were not eaten, but rather used as fertilizer for fields. Great Chebeague was once home to the famous "stone sloops" that carried quarried granite down the eastern seaboard, and marine contractors who built breakwaters, lighthouses, and set navigational markers.

By the late 19th century and throughout the early 20th century, tourists from Canada, Boston and points south began to visit Maine in a phenomenon sometimes known as the "rusticators" movement. Cottages, rooming houses, and inns, such as the historic (but rebuilt) Chebeague Island Inn, were scattered around Casco Bay, served by steamboats from Portland where crowds of tourists from the industrial cities of New England could get back to nature for a few days or weeks.

In 2002 Chebeague Island explored secession from Cumberland, with whom they had been tied for 184 years. The initiative gained traction after school district 51 considered downsizing the island elementary school. The island won independence from Cumberland after votes in the Maine Senate (31-3) and House of Representatives (131-1) on April 5, 2006. [1] The separation took effect on July 1, 2007. 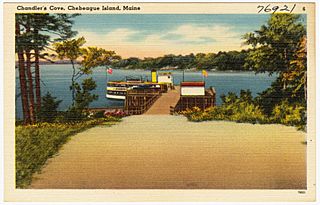 Chebeague Island is known as "Great Chebeague," as it is not always a single landmass. The nearby island of "Little Chebeague" is accessible on foot, via a sandbar that appears at low tide. Being that there are many fresh-water underground springs and rivulets, low-tide exposed sandy areas such as the sandbar, or coves, often have "quicksand" zones that must be noted with caution. Little Chebeague, approximately 3/4 of a mile long, is uninhabited and mostly dense shrub and forest. It was used during World War II as the Fire Fighters School of the Portland Naval Training Center. It is now owned by the Maine Bureau of Parks and Lands as an undeveloped park where picnicking, camping and swimming are allowed, but no facilities are provided. Nearby Great Diamond Island and Little Diamond Island also share this low-tide event of having a "great" and a "small" island classification.

There were 171 households of which 18.1% had children under the age of 18 living with them, 49.1% were married couples living together, 5.3% had a female householder with no husband present, 2.9% had a male householder with no wife present, and 42.7% were non-families. 37.4% of all households were made up of individuals and 19.9% had someone living alone who was 65 years of age or older. The average household size was 1.99 and the average family size was 2.63.

One main macadam-paved road (with various different names, including North Road and South Road) loops around the island, with a few connecting paved roads in between, such as Schoolhouse Road and Littlefield Avenue.[4] Coming off the paved road, there are many unpaved roads going to residential homes and various points and beaches. The beaches are considered state land and anyone can walk on them, like state park property, thus the reason many of the smaller roads simply end at coastal points. Some of smaller "roads" are merely single-lane, rutted sand trails with heavy overgrowth to either side, and on the off-chance two cars meet coming at one another, one car must pull to the side or back up to a suitable area to allow the other to pass. Most residents have "island cars" that they leave there year-round; they take the abuse of rutted back roads with overgrowth that scratches the sides of vehicles, as well as the corrosive, briny Casco Bay air. Island cars are not required to have license plates, although they must be registered. 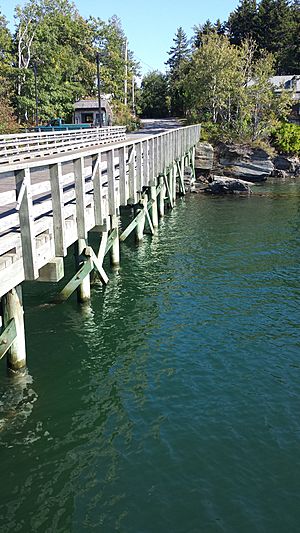 In 1997, the people of Chebeague were a significant part of a movement that managed to overturn Nabisco's decision to discontinue the "Crown Pilot Crackers" from its product line. Due to its being such a tradition with the islanders as an accessory to their consumption of soup, an organized effort was created to bring the chowder cracker back. It was successful, so much so that not only was the Pilot Cracker made again, but it was turned into a media event, with Nabisco donating $1,000 to the Chebeague Historical Society.

Deer, red fox, a variety of non-poisonous snakes, raccoons, grey squirrels, frogs and toads, gray and black back gulls, loons, and ducks are all creatures that can be seen on and about the island. Curiously, no skunks are to be found on this, the second largest island in Casco Bay (Sebascodegan, or "Great Island" - part of the town of Harpswell and connected to the mainland by a bridge, is the largest). Mosquitoes can be a nuisance, and much of the island is soft, sandy, swampy soil (due largely in part to the many underground springs), which are perfect conditions for mosquito breeding.

Harbor seals can often be spotted from the shores of Chebeague, swimming or sunning themselves on the rocks of nearby uninhabited islands or on depth-marker buoys. Occasionally one might spot a porpoise breaking surface as well. Lobsters and lobstering are a big part of Casco Bay, and the ocean surrounding Chebeague is dotted by thousands of lobster pot buoys, the livelihood of many year-round residents in the area. Lobstering is a big commodity of Casco Bay. Locals often fish from the docks and piers for mackerel, bluefish, or striped bass, just a few of many abundant fish in the area, and crab traps hang from the docks. 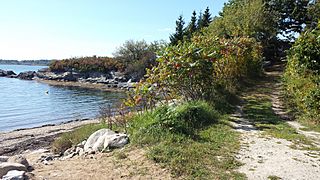 All over the island, as Maine is often known for, are blueberry patches that supply an abundant amount of blueberries, ardently picked by the locals. However, they are slowly decreasing in size as land development continues.

The many inlet coves around the island are home to abundant clam beds. During low tide, these fully exposed areas can be walked on and are often clammed by the locals, some of whom have made a living for decades harvesting steamers, hen clams, and razor clams from the muddy, clay-rich soil. Clamming is often shut down when the red tide — a harmful microscopic ocean organism that affects shellfish — "blooms" in the area. People who eat clams that are affected by the red tide (even steamed ones) can become violently ill; the algae can be fatal. This paralytic poisoning often causes death to humans, birds, larval and adult fish, and marine mammals.

For many years, mussels — which grow in clusters, attached by "beards" to rocks and seaweed, pier pilings, buoys, and just about any stable structure in the ocean — were largely ignored as inedible. But during the 1980s and early 1990s, when clams were getting more difficult to acquire, mussels began to be considered good eating. Some consider these mollusks a bit more "gamey" in taste compared to clams but quite similar otherwise. Mussels can be reaped in much larger quantities, very quickly.

Clams have to be dug out of the sand, by hand, with an angled pick; they very often withdraw deeper into their sand tunnel when they "hear" someone digging for them. This makes harvesting clams a backbreaking task. The clam shell may be broken during this procedure, ruining it. Mussels, on the other hand, are lying attached to rocks on the shore during low tide, and a bucketful can be collected in minutes. Marketing demands have reduced the mussel population greatly, and now they are often "grown" by farmers on floating barges where they can be easily "picked" when ready.

Typically Great Chebeague has 8-to-9-foot (2.4 to 2.7 m) tides under normal conditions. Ocean floor geography in the general area can vary drastically, thus careful navigation must be practiced when boating, even in small vessels. Many islands, including Great Chebeague, have extended rock outcroppings that are completely underwater during high tide, but may be lurking just below the surface as the tide drops, and may appear 3 to 10 feet (0.91 to 3.05 m) out of the water during low tide. The rip tide can be several knots, and rowing against it is physically impossible: Extra care must be taken when venturing out in small watercraft. Even on the clearest day, a thick fog can suddenly "roll in" out of nowhere, reducing visibility to zero. 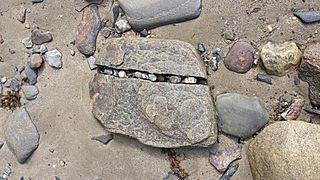 Even during the warmest summer months, the ocean temperature is barely above 60 °F (16 °C). Falling out of a boat into the water anytime between September and April can be dangerous, if not fatal, depending on the time of year. Swimming is enjoyed usually in inlets and coves where the water temperature is slightly higher, and off the pier or docks. Like most islands in the area, Chebeague has as much rocky cliffs for a shoreline as beaches. The "Niblic" beach by the boatyard and Deer Point by Chandler's Cove are popular beaches for their soft stretch of sand. On a clear day at Deer Point, one can see Mount Washington in New Hampshire. When the sun goes down, temperatures can drop drastically and, even on the warmest summer days, nights are often very cool and can require long sleeves and pants and even a fire in the fireplace. Winters can be brutal, and usually by September, most of the non-year-round residents are packed up and gone.

There is cell phone service on the island, but it can be patchy if one is on the east side of the island, which faces the ocean. There is a post office and mail delivery, DSL Internet service, a boatyard, a church, a cemetery, a museum, a hotel (the Chebeague Island Inn) and restaurant, nine-hole golf course, a "Clam Shack" take-out restaurant (with picnic tables on premises), the Library/Island Hall/Health Center (with wireless access), souvenir shops (The Niblic, Island Riches, and (previously) The Cobbler Shop), Doughty's Island Market, a taxi service, and a gas pump. There is a full-time volunteer fire station and EMTs/ambulance. Police matters are handled by Cumberland County Sheriff officers. If there is a medical emergency, one must be taken to the mainland via the ambulance and ferry, which are always on call. Children of year-round residents take a boat back and forth to the mainland every day from the Stone Pier to go to middle and high school. Elementary-school-age children usually stay on the island to attend the school house, which houses grades K-5. The Chebeague High School closed in 1956; the schoolhouse, built in 1871, still stands and serves as a museum for Great Chebeague's history.

All content from Kiddle encyclopedia articles (including the article images and facts) can be freely used under Attribution-ShareAlike license, unless stated otherwise. Cite this article:
Chebeague Island, Maine Facts for Kids. Kiddle Encyclopedia.