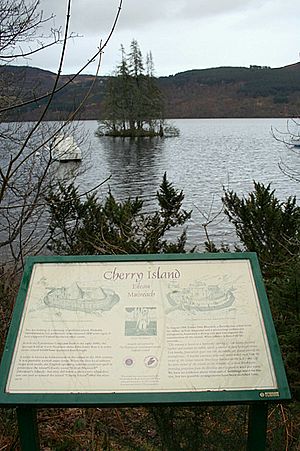 Cherry Island (Scottish Gaelic: Eilean Muireach, meaning Murdoch's Island) is the only island in Loch Ness, Highland, Scotland, and is an example of a crannog. The island is about 150 yards (140 m) from the shore near the southern end of the loch. The island was originally 160 feet (49 m) by 168 feet (51 m) across, but is now smaller as the level of the loch was raised when it became part of the Caledonian Canal. The increase in the level of the loch caused a smaller natural island nearby Eilean Nan Con (also known in its Anglicised form of "Dog Island"), to be totally submerged.

A castle stood on the island during the 15th century; this was constructed of stone and oak wood and was probably used as a fortified refuge. It has been suggested that Eilean Muireach may have been a hunting lodge, with Eilean Nan Con the home for the hunting dogs.

All content from Kiddle encyclopedia articles (including the article images and facts) can be freely used under Attribution-ShareAlike license, unless stated otherwise. Cite this article:
Cherry Island (Loch Ness) Facts for Kids. Kiddle Encyclopedia.