Chevy Chase Village, Maryland is an incorporated municipality in Montgomery County, Maryland, United States, bordering Washington, D.C. It is made up of sections 1, 1a, and 2 of Chevy Chase, as originally designated by The Chevy Chase Land Company. The population was 1,953 as of the 2010 census. The town is the wealthiest in Maryland, with a median income of over $250,000, the highest income bracket listed by the census bureau, and a median home value of $1,823,800.

Chevy Chase Village includes 721 homes. It is known for its speed limit enforcement actions, which produce 24% of its annual revenue. The population has historically been over 95% white, while the non-white residents are mostly transient. Chevy Chase Village also includes Chevy Chase Club, a private country club with an initiation fee of over $50,000.

According to the United States Census Bureau, the town has a total area of 0.42 square miles (1.09 km2), all of it land. It is made up of Chevy Chase sections 1, 1a and 2 as originally designated by The Chevy Chase Land Company.

There were 697 households, of which 36.9% had children under the age of 18 living with them, 82.2% were married couples living together, 3.9% had a female householder with no husband present, 1.3% had a male householder with no wife present, and 12.6% were non-families. 11.2% of all households were made up of individuals, and 7% had someone living alone who was 65 years of age or older. The average household size was 2.80 and the average family size was 2.99. 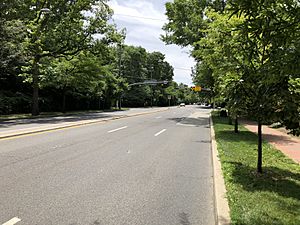 Two state highways serve Chevy Chase Village directly. The most significant of these is Maryland Route 185 (Connecticut Avenue). MD 185 extends south to Washington, D.C. and continues north to the nearest Interstate highway, Interstate 495 (the Capital Beltway). The other state highway serving Chevy Chase Village is Maryland Route 186 (Brookville Road), which is a comparatively minor local connector running parallel to, and east of, MD 185.

All content from Kiddle encyclopedia articles (including the article images and facts) can be freely used under Attribution-ShareAlike license, unless stated otherwise. Cite this article:
Chevy Chase Village, Maryland Facts for Kids. Kiddle Encyclopedia.