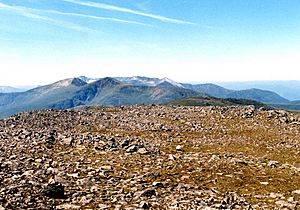 Looking west from the summit over the “Easains” and The Grey Corries to Ben Nevis.

Chno Dearg (Gaelic: A' Chnò Dhearg) is a Scottish mountain situated 25 km east of Fort William, Highland in the Lochaber area of the Highland council area.

Chno Dearg is situated to the east of Loch Treig in the high ground between the loch and Strath Ossian. It reaches a height of 1046 metres (3432 feet) and qualifies as a Munro and a Marilyn. It is not regarded as a particularly striking hill, being described in the SMCs Munro guide as “a rounded and featureless hill”, its convex slopes giving a monotonous climb to the summit. The neighbouring Munro of Stob Coire Sgriodain with which Chno Dearg is usually climbed is considered a more exciting hill even though it is 70 metres lower in altitude.

Chno Dearg has a considerable topographic prominence of 649 metres, being surrounded by the deep glens of Glen Spean, Loch Treig and Strath Ossian, and its summit is a fine viewpoint especially for the Creag Meagaidh group of hills to the Northeast. Another feature of the mountain is its appeal to the ski mountaineer, with its sweeping northern slopes offering a continuous five km run with 750 metres of descent from the summit. The mountains name translates from the Gaelic as “Red Nut”, however early maps give the name as Cnoc Dearg which translates as “Red Hill” and this is the correct name. The red refers to the profusion of heather on the hill.

Chno Dearg expansive northern flank falls gradually to Glen Spean and the shores of Loch Laggan, the lower part being covered with an extensive forestry plantation. These northern slopes can be boggy at times with numerous small streams, and contain the subsidiary top of Meall Chaorach (815 metres) which is situated 1.5 km from the main summit. On the western side of the hill is Coire an Lochain, a shallow hollow with gentle slopes which contains Lochan Coire an Lochain.

The mountain's main ridge goes Southwest from the summit to a col with a height of 923 metres. Here it splits, with one spur swinging round the head of Coire an Lochain to go eventually north and link to the adjoining Munro of Stob Coire Sgriodain. The other spur continues southerly to link to Meall Garbh (976 metres) which is listed as a “top” in Munro's Tables and has steep crags on its eastern flank. The south side of Chno Dearg contains the steep-sided Coire nan Cnamh which falls precipitously to the glen of the Allt Feith Thuill, a tributary of the River Ossian. All drainage from the mountain reaches the River Spean to the north where it flows to the west coast of Scotland.

Chno Dearg is usually climbed from the hamlet of Fersit (NN350784); as a rule the adjacent Munro of Stob Coire Sgriodain is also included in the ascent. The route from Fersit offers a natural round of Coire an Lochain, taking in both Munros, with a brief detour to take in the “top” of Meall Garbh. However the proximity of the West Highland Line in the area offers walkers the alternative of starting from Corrour railway station and climbing Beinn na Lap first and then continuing north over Chno Dearg and Stob Coire Sgriodain to finish at Tulloch railway station to catch the evening train.

All content from Kiddle encyclopedia articles (including the article images and facts) can be freely used under Attribution-ShareAlike license, unless stated otherwise. Cite this article:
Chno Dearg Facts for Kids. Kiddle Encyclopedia.