Christmas cookies or Christmas biscuits are traditionally sugar cookies or biscuits (though other flavours may be used based on family traditions and individual preferences) cut into various shapes related to Christmas. 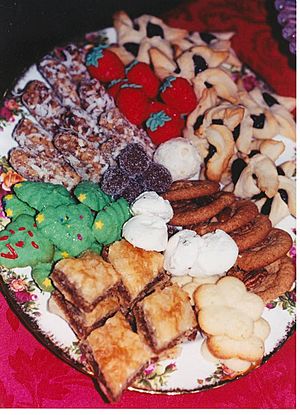 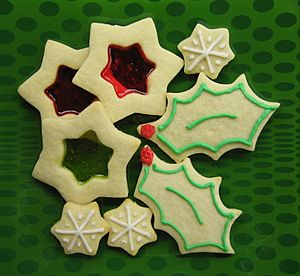 Modern Christmas cookies can trace their history to recipes from Medieval Europe biscuits, when many modern ingredients such as cinnamon, ginger, black pepper, almonds and dried fruit were introduced into the west. By the 16th century Christmas biscuits had become popular across Europe, with Lebkuchen being favoured in Germany and pepparkakor in Sweden, while in Norway krumkake were popular.

The earliest examples of Christmas cookies in the United States were brought by the Dutch in the early 17th century. Due to a wide range of cheap imported products from Germany between 1871 and 1906 following a change to importation laws, cookie cutters became available in American markets. These imported cookie cutters often depicted highly stylised images with subjects designed to hang on Christmas trees. Due to the availability of these utensils, recipes began to appear in cookbooks designed to use them. In the early 20th century, U.S. merchants were also importing decorated Lebkuchen cookies from Germany to be used as presents.

In Canada and the United States, since the 1930s, children have left cookies and milk on a table for Santa Claus on Christmas Eve, though many people simply consume the cookies themselves. The cookies are often cut into the shape of candy canes, reindeer, holly leaves, Christmas trees, stars, or angels.

Gingerbread has existed in some form since sugars and spices were brought back to Europe, from soldiers in the Crusades. However, it was not until Queen Victoria and Prince Albert included it with a variety of other German Christmas traditions that the gingerbread cookies became primarily associated with Christmas. Gingerbread cookies are also traditional in Alsace. 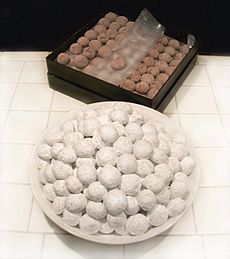 Bredala are Christmas cookies in Alsatian cuisine of France.

A traditional cookie which dates from the Middle ages in Norway, Fattigmann cookies are deep fried in unsalted fat.

Kerstkransjes are traditional Christmas cookies from the Netherlands. They are round with a hole in the middle. The most usual type uses almond chips as decoration. 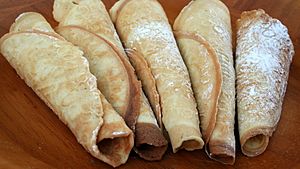 Krumkaker are traditional cookies from Norway. They were originally baked over open fires using decorative irons; however modern cooks use electric or stovetop irons to bake these wafer-thin biscuits. Krumkaker owe their name, which means "bent cake" or "twisted cake", to the fact that they are wrapped in a cone shape.

Pepparkakor are crisp, thin gingersnap biscuits from Sweden, traditionally cut out in flower and heart shapes.

Pfeffernüsse originate in Scandinavia and date from medieval times when spices were used exclusively in holiday baking.

Repostería is a Mexican type of shortbread-like cookie that's lightly baked and dipped into a cinnamon sugar blend until the cinnamon sugar surrounds the cookie. These are often served with coffee or hot spiced Mexican chocolate. 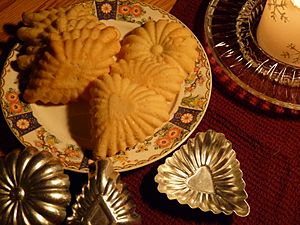 Sandbakelse are sugar cookies from nineteenth century Norway. The dough is pressed into tins, and then baked in an oven.

Springerle have been traditional Christmas cookies in south Germany (Bavaria and Baden-Württemberg) and Austria for centuries. They are anise-flavored cookies made from an egg-flour-sugar dough. They are usually made in simple shapes, such as rectangles or circles. 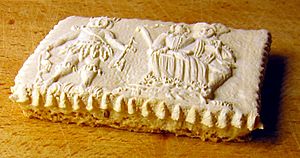 After shaping, they usually have a picture or design pressed into the soft dough with specially carved rolling pins or presses. After they are baked, the designs are sometimes colored if the intention is to use the cookies as decorations.

All content from Kiddle encyclopedia articles (including the article images and facts) can be freely used under Attribution-ShareAlike license, unless stated otherwise. Cite this article:
Christmas cookie Facts for Kids. Kiddle Encyclopedia.