Chugwater is a town in Platte County, Wyoming, in the United States. As of the 2010 census, the town population was 212.

The Chugwater area, with its proximity to Fort Laramie, was visited by some of the earliest Western expeditions, including that of Stephen Watts Kearny in 1845, and cattle were first wintered in the valley as early as 1859.

Early expeditions to the Valley

In 1870, the Hayden Expedition passed through what they referred to as "the valley of the Chug". Along on the expedition was famed Hudson River School painter, Sanford Robinson Gifford (1823-1880), who sketched Chugwater Bluff, and later completed a large painting of it entitled "Valley of the Chugwater". Hayden's photographer, William Henry Jackson, noted in his journal that the Chugwater area was a wintering area for cattle: "A very conspicuous feature which we notice in descending the valley of the Chug is the high bluff of Lower Cretacious sandstone, which stretches away toward the northeast like a hugh wall. the jointage is so regular that it presents the appearance of massive mason-work gradually falling to decay. The sides of these sandstone walls are from 40 to 60 feet perpendicular, sometimes overhanging, large masses of which have broken off and fallen to the base. Their most striking feature, however is to weather into most picturesque castlllated forms. The valley of the Chug is 100 miles long, and is a favorite place to winter stock."

First settlers & the coming of the railroad

The first settler in the valley is reported to have been James Bordeaux (1814-1878), who opened a general store in 1868, located at the crossroads where the road from Cheyenne forks into the roads leading to Fort Fetterman and to Fort Laramie. In 1884, the Swan Land and Cattle Co. was established, and in 1886, the Cheyenne and Northern Railway was chartered to serve points north of Cheyenne in Wyoming. It was as a result primarily of the Swan Land and Cattle Co., and the railroad, that the town of Chugwater grew up.

Establishment of the town

The town of Chugwater was surveyed and laid out by engineers for the Swan Land and Cattle Co. in 1886. The town grew slowly, but in 1904 a Masonic Hall was constructed, and the Grant Hotel opened in 1912. After the drought in the early 20th Century, many of the early settlers left the area, but a number stayed, and by 1919 the town was incorporated.

As late as the 1940s, Chugwater was still a railroad stop where cattle were loaded for shipment east to the Union Stockyards in Omaha, Nebraska.

Clayton Danks, the model for the rider on the Wyoming Bucking Horse and Rider state symbol, worked on the 2-Bar Ranch near Chugwater early in the 20th century. The bucking horse on the logo, that he rode at the Cheyenne Frontier Days rodeo in 1909, was Steamboat, who was foaled at Chugwater in 1896.

State Representative Robert Mills Grant was among those who have drove cattle into Chugwater.

The former Speaker of the Wyoming House of Representatives, Harold Hellbaum, farmed and ranched in Chugwater. He served in the state legislature from 1963–1977, with his last term as Speaker.

Etymology of the town's name

Some historians hold that the name "Chugwater" is derived from a Mandan account of a bison hunt. According to this narrative, a chief was disabled during the hunt and his son took charge of the hunt or "buffalo jump". Under his direction, hunters drove the bison over nearby cliffs; when the animals reached the ground below, a sound of "chugging" was heard by the hunters. The story concludes with an etymology: since a stream was near the base of the cliffs, the site of the stampede has been called "the place" or "water at the place where the buffalo chug.".

The iconic black horse named "Steamboat", who was the model for the bucking horse and rider motif on Wyoming license plates, came from the Tyrrell ranch located near Chugwater, and was given to the Cheyenne Frontier Days organization by the ranch's general chairman, Ace V. Tyrrell. As a young horse, Steamboat sustained a nose injury, requiring removal of a bone fragment from a nostril, and as a result, developed a sound resembling the whistling of a steamboat whenever he bucked.

Steamboat was first ridden at a Frontier Days rodeo in 1909, by Clayton Danks (1879 – 1970) who was then working as a ranch hand in the Chugwater area, and was stabled for many years south of Chugwater near Cheyenne, in an historic barn owned and maintained by Mike and Linda Holst. The Wyoming license plate logo, showing Steamboat being ridden by Danks, is the longest-running license plate motif in the world.

The famous horse died in 1914, and is buried in Frontier Park in Cheyenne near bucking chute number 9, the only horse to be so honored with interment on park grounds. In 1975, Steamboat was inducted into the National Cowboy Hall of Fame in Oklahoma City, and in 1979, into the Pro Rodeo Hall of Fame in Colorado Springs. Steamboat and Danks are also on the logo for the University of Wyoming, and on the Wyoming state quarter.

According to the United States Census Bureau, the town has a total area of 3.06 square miles (7.93 km2), all of it land.

Chugwater is located in a valley with steep claystone bluffs to the north and west. Chugwater Creek, which runs through the middle of the valley and cuts through the southern edge of town, is the town's namesake. 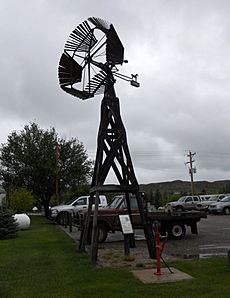 There were 93 households of which 25.8% had children under the age of 18 living with them, 48.4% were married couples living together, 10.8% had a female householder with no husband present, 5.4% had a male householder with no wife present, and 35.5% were non-families. 34.4% of all households were made up of individuals and 12.9% had someone living alone who was 65 years of age or older. The average household size was 2.28 and the average family size was 2.90.

There were 94 households out of which 33.0% had children under the age of 18 living with them, 55.3% were married couples living together, 8.5% had a female householder with no husband present, and 30.9% were non-families. 26.6% of all households were made up of individuals and 16.0% had someone living alone who was 65 years of age or older. The average household size was 2.60 and the average family size was 3.18.

The Diamond Ranch, established near Chugwater in 1878 by George Rainsford, was placed on the National Register of Historic Places on September 28, 1984. It continues to function as a guest ranch.

All content from Kiddle encyclopedia articles (including the article images and facts) can be freely used under Attribution-ShareAlike license, unless stated otherwise. Cite this article:
Chugwater, Wyoming Facts for Kids. Kiddle Encyclopedia.