Cider Run is a tributary of Bowman Creek in Wyoming County, Pennsylvania, in the United States. It is approximately 2.5 miles (4.0 km) long and flows through Forkston Township and Noxen Township. The watershed of the stream has an area of 3.77 square miles (9.8 km2). The stream is not designated as an impaired waterbody. Its watershed is classified as Exceptional Value waters and a Migratory Fishery and the stream is designated as a Wilderness Trout Stream. 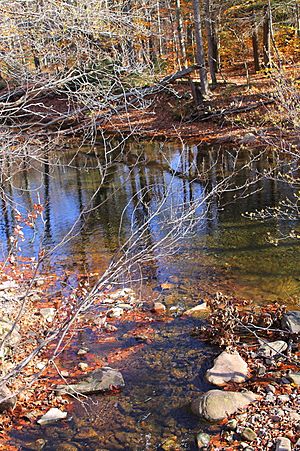 Mouth of Cider Run, with Bowman Creek in the background

Cider Run has no named tributaries. However, it does have one unnamed tributary, which is approximately 1.4 miles (2.3 km) long and begins in a wetland.

Cider Run is not designated as an impaired waterbody.

The surficial geology in the vicinity of Cider Run mainly consists of alluvium, except in its upper reaches, where it consists of a till known as Wisconsinan Till. Wisconsinan Till occurs along the stream's valley throughout its length and is underlain by glacial lake clays in some reaches. Bedrock consisting of sandstone and shale occurs in the valley's higher elevations.

Cider Run flows through a glen that has an "interesting" rock face in one area. 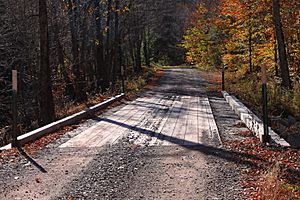 Bridge over Cider Run in its lower reaches

The watershed of Cider Run has an area of 3.77 square miles (9.8 km2). The stream is entirely within the United States Geological Survey quadrangle of Dutch Mountain. The streams mouth is near Mountain Springs.

Cider Run is a small, but relatively secluded stream. The stream has been described as a "trout trickle" that cannot be accessed directly from any road.

The drainage basin of Cider Run is designated as Exceptional Value waters and a Migratory Fishery. Wild trout naturally reproduce in the stream from its headwaters downstream to its mouth. The stream is also classified as a Wilderness Trout Stream with wild brook trout. It is one of two Wilderness Trout Streams in Wyoming County, the other being Sorber Run.

Cider Run has a substantial wild trout population. When it was surveyed in 2002, its biomass class was C. The biomass of the trout was 17.55 kilograms per hectare (15.66 lb/acre).

All content from Kiddle encyclopedia articles (including the article images and facts) can be freely used under Attribution-ShareAlike license, unless stated otherwise. Cite this article:
Cider Run (Bowman Creek tributary) Facts for Kids. Kiddle Encyclopedia.