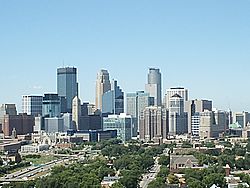 Minneapolis on a sunny summer afternoon

The climate of Minneapolis–Saint Paul is the long term weather trends and historical events of the Minneapolis–Saint Paul metropolitan area in east central Minnesota. Minneapolis and St. Paul, together known as the Twin Cities, are the core of the 15th largest metropolitan area in the United States. With a population of 3.6 million people, the region contains approximately 60% of the population of Minnesota. Due to its location in the northern and central portion of the U.S., the Twin Cities has the coldest average temperature of any major metropolitan area in the nation. Winters can be cold, summer is warm to hot and frequently humid, snowfall is common in the winter and thunderstorms with heavy rainfall occur during the spring, summer and autumn. Though winter can be cold, the area receives more sunlight hours in mid-winter than many other warmer parts of the country, including all of the Great Lakes states, the Pacific Northwest, parts of the South, and almost all of the Northeast. Unless otherwise indicated, all normals data presented below are based on data at Minneapolis/St. Paul International Airport, the official Twin Cities climatology station, from the 1981−2010 normals period. 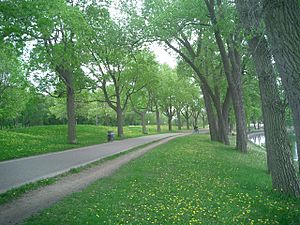 A lakeside bike path in summer

The climate of the Twin Cities is classified as humid continental (Köppen Dfa). A feature of the humid continental climate in the United States is that weather can be unpredictable with extremes occurring in many phases of measurements. For example, the Twin Cities has a hotter all-time record high temperature of 108 °F (42 °C) than the entire state of Florida, despite being located nearly 1000 miles farther from the equator. Conversely, temperatures during the winter months are colder in the Twin Cities than in any other major metropolitan area in the continental United States, and are about equal to those in Anchorage, Alaska, which is around 1,000 miles closer to the North Pole. The Twin Cities can also experience droughts, floods, and on average are windier than Chicago, Illinois (the "Windy City", although that is not the origin of the phrase).

A significant impact on temperatures in the Twin Cities the past several years has been the urban heat island effect. Large amounts of concrete and asphalt, coupled with numerous tall buildings (which block wind) help to trap heat close to the surface, resulting in warmer temperatures, especially at night, than that of the surrounding areas (even those further to the south). For example, the average annual temperature of 45.4 at the Minneapolis St. Paul International airport is warmer than that of Rochester (43.4) and Mankato (44.7) which are both located farther to the south. 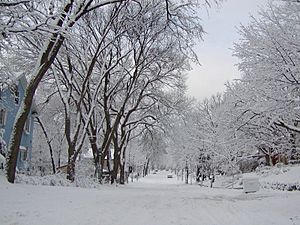 The Twin Cities experiences a wide range of precipitation types. Rain is the most common form during the summer months, while snow, sleet, freezing rain, and occasionally rain occur during the winter. The summer months of June, July and August account for nearly half of the annual precipitation total across the Twin Cities. Most of this rain falls from thunderstorms, a frequent summer occurrence. Even though summer is the primary season for the Twin Cities to experience thunderstorms, they can occur from March to November. On rare occasions thundersnow can occur, where thunder and lightning accompanies winter or (more usually) spring snowstorms. During spring and summer, some thunderstorms are severe. These storms produce damaging straight line winds, large hail and, occasionally, a tornado. The Twin Cities has experienced several major derecho events, most recently during the Late-May 1998 Tornado Outbreak and Derecho which traveled from South Dakota to New York on May 30 – May 31, 1998. Summertime thunderstorms are fueled by dew points that often reach into the 70s °F (21 °C) and sometimes even 80 °F (27 °C). 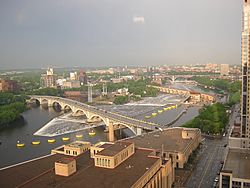 Winter precipitation comes in a few different forms. Snow is the main form of precipitation, but freezing rain, ice, sleet and sometimes even rain are all possible during the winter months. Larger storm systems, often Panhandle hooks or other storms that occur with a meridional flow, can bring large amounts of snow and even blizzard conditions. The average annual snowfall in the Twin Cities is 45.3 inches (115.1 cm), with an average of 100 days per year with at least 1 inch (2.5 cm) of snow cover. The most snow the Twin Cities has officially seen during one winter was in 1983–1984 with 98.4 inches (250 cm), and the least was in 1930–1931 with 14.2 inches (36.1 cm).

All content from Kiddle encyclopedia articles (including the article images and facts) can be freely used under Attribution-ShareAlike license, unless stated otherwise. Cite this article:
Climate of Minneapolis–Saint Paul Facts for Kids. Kiddle Encyclopedia.