Clodomiro Picado Twight (April 17, 1887 - May 16, 1944), also known as "Clorito Picado", was a Costa Rican scientist, born in Nicaragua, who was recognized for his research and discoveries. He was a pioneer in the researching of snakes and serpent venoms; his internationally recognized achievement is the development of various antivenins. His work on molds was a precursor to the formal discovery of penicillin. His work resulted in compounds which he used to treat patients at least one year before the re-discovery of penicillin by Alexander Fleming. He wrote over 115 works, mainly books and monographs.

Picado was born in San Marcos, Nicaragua but moved, with his parents, to Costa Rica in 1890. In 1908, Picado won a scholarship of the Costa Rican Congress to study in Paris, France.

In 1913, he finished his university studies in La Sorbonne, where he earned his BSc in zoology and botany, as well as a doctorate degree. In the same year, he came back to Costa Rica to run the laboratory of San Juan de Dios Hospital. At the same time, he was teaching sciences at San Luis Gónzaga School in Cartago city. 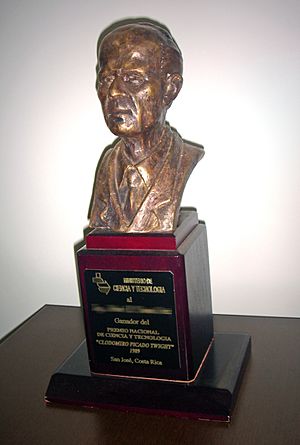 Sir Alexander Fleming, a Scottish scientist, is commonly said to be the person who learned about the antibacterial attacks of a fungus known as Penicillium notatum in 1928. In March 2000, Costa Rican doctors showed some notebooks with research belonging to Picado. In these notebooks, he explained his experiments between 1915 and 1927. These experiments had been developed to explain that Penicillium decreased bacterial activity.

Picado had reported his work to the Paris Academy of Sciences in France, but this Academy did not patent it, even though Picado had studied the fungus years before Fleming.

Although, the discovery of penicillin has been attributed to Alexander Fleming, Picados' old laboratory notebooks from 1923 show records of the antibiosis of Penicillium sp.

For this reason he is renowned as one of the precursors of the penicillin antibiotic. The report with the results of the treatments performed with penicillin by Dr. Picado were published by the Biology Society of Paris in 1927.

The scientific work of Dr. Picado was prolific and very extensive; it is calculated that he wrote about 115 research papers in his lifetime, delving into nearly all aspects of his environment: soil, flora, fauna, human tissues, water, and others. Among them are included books and monographs. His work covered topics of zoology, botany of bromeliads, ophidism, physiology, phytopathology, industrial microbiology, medical microbiology, and immunology.

Picado studied the creation of various anti-venom serums. This led to the create of the Instituto Clodomiro Picado in 1970. It is a research unit of the University of Costa Rica The unit is works on research in Toxicology, Herpetology and Immunology. It also deals with the production of anti-venom. It was named for him in honor of his life’s work.

All content from Kiddle encyclopedia articles (including the article images and facts) can be freely used under Attribution-ShareAlike license, unless stated otherwise. Cite this article:
Clodomiro Picado Facts for Kids. Kiddle Encyclopedia.