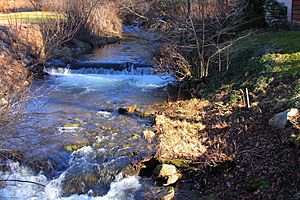 Coles Creek begins on Central Mountain in southeastern Sullivan County, Pennsylvania and flows south into Sugarloaf Township, Columbia County, near the border between Columbia County, Luzerne County, and Sullivan County. The creek flows south, leaving Central Mountain behind, to Pennsylvania Route 118, where it receives the tributary Chimneystack Run (which also starts on Central Mountain). It turns southwest and begins flowing parallel to Pennsylvania Route 487. It receives Ashelman Run and Fellow Hollow before flowing through the community of Tri Mills. Downstream of Tri Mills, it receives Hess Hollow and continues southwest to the community of Coles Creek. Shortly afterwards, the creek reaches its confluence with Fishing Creek.

The pH of Coles Creek is sometimes only slightly above 6.0. However, it is usually between 6.5 and 7.5. The creek does not experience severe episodic acidification.

There is a moraine at the confluence of Coles Creek with Fishing Creek. This causes there to be cone-shaped hills in the area.

Coles Creek was likely named between 1800 and 1810 after Ezekiel Cole, a mill owner in the area.

A fish habitat made of log cross vanes was installed in the headwaters of Coles Creek in 2012.

The biodiversity level of Coles Creek is similar to parts of the upper reaches of the main stem of Fishing Creek.

In 2011, the habitat quality of upper Fishing Creek and its tributaries were rated on a scale of 1 to 200 (with a higher rating indicating better habitability) by Point Park University and the Fishing Creek Sportsmans' Association. The lower reaches of the creek were given a score of 166 to 200, indicating an optimal habitat. The Hilsenhoff Biotic Index of the creek is 2.6, which is higher than average. The creek's Shannon Diversity Index is 2.3, which is slightly above average.

The Pennsylvania Fish and Boat Commission has designated Coles Creek to be Class A Wild Trout Waters between its source and the mouth of Marsh Run. Coles Creek and all of its tributaries support wild brook trout and wild brown trout.

There are nearly 200 aquatic macroinvertebrates per square meter in Coles Creek.

All content from Kiddle encyclopedia articles (including the article images and facts) can be freely used under Attribution-ShareAlike license, unless stated otherwise. Cite this article:
Coles Creek (Pennsylvania) Facts for Kids. Kiddle Encyclopedia.