Kids Encyclopedia Facts
Not to be confused with Colquitt County, Georgia.

The Colquitt Town Square Historic District was added to the National Register of Historic Places in 1983. 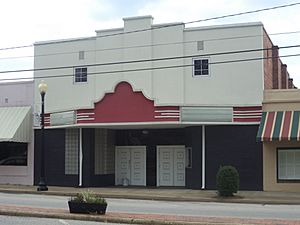 In December 2003, the musical play "A Southern Christmas Carol" by award-winning playwright Rob Lauer, made its world premiere at Colquitt's Cotton Hall Theatre. Featuring a New York City-based cast of professional actors, the show was a critical and box-office success. The show was presented at Cotton Hall again in 2004 and 2005—attracting Holiday season tourists to Colquitt from throughout the south-eastern U.S. "A Southern Christmas Carol" has, in the years since, become an increasing popular Holiday season show that is produced by theatres throughout the south-eastern United States.

Colquitt was named Georgia's First Mural City by the state legislature, and hosted the Global Mural Conference in 2010.

Colquitt is a stop on the Trail of the Whispering Giants.

There were 772 households out of which 28.5% had children under the age of 18 living with them, 37.4% were married couples living together, 22.2% had a female householder with no husband present, and 35.0% were non-families. 32.0% of all households were made up of individuals and 18.5% had someone living alone who was 65 years of age or older. The average household size was 2.34 and the average family size was 2.92.

All content from Kiddle encyclopedia articles (including the article images and facts) can be freely used under Attribution-ShareAlike license, unless stated otherwise. Cite this article:
Colquitt, Georgia Facts for Kids. Kiddle Encyclopedia.