Compton sits nestled below the ridge that stretches south west from Aldersley, with some of its housing climbing the steep hill near 'The Holloway' on the climb towards Tettenhall Wood. Across the Smestow valley the terrain rises again in the direction of Finchfield. The valley here through which the Smestow Brook flows was formed as a glacial meltwater channel. The area was quarried for its sandstone.

Compton Lock on the Staffordshire and Worcestershire Canal was the starting point in 1766 for the construction of the canal under James Brindley.

In the late 19th-early 20th century, Compton was home of a distinguished local artist Joseph Vickers de Ville (1856–1925). It was during this time that the still existing terraced housing was built along Henwood Road near the Bridgnorth Road junction. 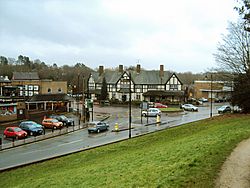 Today, the quarrying has stopped, and housing estates have been constructed along the side of the valley. Much of the area was built in the latter half of the 20th century, though Compton does retain some of its older buildings such as several houses on The Holloway.

Next to the Sir Jack Hayward training ground is St Edmund's Catholic Academy and opposite is St Peter's Collegiate School.

Compton has several shops, take-aways, restaurants and pubs. They include Clare's of Compton hairdressers, The Wineseller off-licence, A Cottage Garden flower shop, Taylor Biddle opticians, Compton Dry Cleaners and Launderette, Spar convenience store and in 2013 the Daisy Fresh and Essential (formerly the Daisy Freezer Centre) was replaced by a Sainsburys Local. "Cresswell's Hairdressing " is nestled beside the canal at "Glencroft, the old wharf" .There is a fish and chip takeaway called Pep's Place on the Bridgnorth Road. Restaurants include Tiger Wok Thai / Chinese restaurant, and House Of Canton Cantonese restaurant. A pub / restaurant, The Oddfellows sits alongside the Compton island, and one of the oldest pubs in Wolverhampton, The Swan at Compton is prominently located on the junction of The Holloway and Bridgnorth Road.

All content from Kiddle encyclopedia articles (including the article images and facts) can be freely used under Attribution-ShareAlike license, unless stated otherwise. Cite this article:
Compton, Wolverhampton Facts for Kids. Kiddle Encyclopedia.