Conagra was founded in 1919 by Frank Little and Alva Kinney, who brought together four grain mills as Nebraska Consolidated Mills (NCM) with its headquarters in Grand Island, Nebraska. The headquarters were moved to Omaha in 1922. The company ran at a profit until 1936, when Kinney retired. In 1940, the company began producing flour at its own mill, and in 1942 ventured into the livestock feed business. That year president R.S. Dickinson opened the company's first out-of-state facility in Alabama with a flour mill and animal feed plant.

After researching new uses for its flour, NCM funded the establishment of the Duncan Hines brand of cake mixes in 1951 as a way to market more flour. This venture was very successful, leading the company to its current place as the third largest flour miller in the U.S. However, this did not lead NCM to consider other food ventures, and instead it sold its assets in Duncan Hines to Procter & Gamble in 1956. As American households purchased more and more prepared and instant foods in the 1950s and 1960s, NCM chose not to expand into the businesses that used its flour, instead turning in the opposite direction and focusing more on raw foods like poultry and expanding its livestock feed business.

In 1971, Nebraska Consolidated Mills changed its name to "ConAgra", a portmanteau of con for consolidated and agra, similarly short in English for agriculture. The 1970s brought the company to the brink of ruin as it lost money expanding into the fertilizer, catfish, and pet product industries and as commodity speculation wiped out ConAgra's margins on raw foods. In 1974, C. Michael "Mike" Harper, an experienced food industry executive, took over the firm and brought it back from the brink of bankruptcy. Nonetheless, ConAgra's business model left it vulnerable to volatile commodity prices. In response, the company set off on a two-decade-long buying spree, purchasing over one hundred prepared food brands, starting with its 1980 purchase of Banquet Foods. It moved heavily into the frozen food business and the packaged meat industry, and then picked up a selection of other brands from firms like RJR Nabisco and Beatrice Foods among others, as the leveraged buyouts of the 1980s resulted in the divestiture or breakup of many major American consumer product firms. In 1993 alone it purchased $500 million in smaller firms, and in 1998 it purchased another $480 million in brands from Nabisco.

On July 14, 2014, Conagra announced that it had acquired TaiMei Potato Industry Limited, a potato processor in Shangdu, Inner Mongolia. This acquisition expands ConAgra Foods’ Lamb Weston operations in a market that has growing demand for frozen potato products.

On October 1, 2015, Conagra announced that it would cut about 1,500 jobs and relocate its headquarters to Chicago as part of a restructuring plan.

On November 18, 2015, Conagra announced it was spinning off its Lamb Weston division into a separate company that will be based in Kennewick, Washington. They also announced that ConAgra Foods will be renamed Conagra Brands when they move HQ to Chicago in 2016. Thomas Werner (unrelated to the television producer and Boston Red Sox owner) and Timothy McLevish were named executive and executive chairman.

The move of headquarters from Omaha to Chicago was completed in late June 2016 with the opening of their new HQ at the Merchandise Mart building. It is the first time since 1922 that ConAgra has not been headquartered in Omaha and the first time in the company's history, dating back to its 1919 founding, that the headquarters will not be in the state of Nebraska.

The Lamb Weston spinoff was completed on November 9, 2016, with the new company headquartered in the suburbs of Boise, Idaho, with major manufacturing facilities in Oregon and Washington. At the same time, ConAgra Foods changed their name to ConAgra Brands, complete with a brand new logo.

In 2002, Conagra and other major food and beverage companies including PepsiCo, General Mills, Kelloggs, Sara Lee, and H. J. Heinz Co. spent millions to defeat Oregon Ballot Measure 27, which would have required food companies to label products that contain genetically modified ingredients. According to the Oregon Secretary of State, ConAgra contributed $71,000 to the campaign to defeat the state ballot initiative.

Throughout 2012, ConAgra contributed $1,176,700 to a $46 million political campaign known as the Coalition Against the Costly Food Labeling Proposition, sponsored by food producers. The organization's goal was to oppose the California citizen's initiative, known as Proposition 37, demanding mandatory labeling of foods containing genetically modified ingredients. 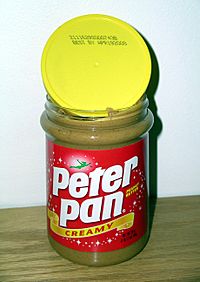 Conagra recalled 19 million pounds of ground beef in July 2002 with E. coli bacterial contamination. It was the third-largest recall up to that time. That meat was linked to the illnesses of 19 people in six Western and Midwestern states.

In February 2007, Conagra recalled jars of Peter Pan and Great Value brand peanut butter with the product code "2111" on the lid, because they were linked to a Salmonella outbreak. Ultimately, the Centers for Disease Control (CDC) documented more than 628 individuals who were stricken with salmonella poisoning in 47 states that could be traced back to Peter Pan and Great Value peanut butter. Of those, 20% were hospitalized, according to the CDC, which reported no deaths associated with the outbreak. Since Peter Pan (but not Great Value) is only made at one plant, the recall included all Peter Pan jars sold in the U.S. between May 2006 and February 2007. In May 2015, the company agreed to plead guilty to knowingly releasing products tainted with salmonella into interstate commerce. Sentencing was delayed by U.S. District Court Judge W. Louis Sands, who ordered nationwide newspaper advertisements searching for victims of the outbreak so the government could supply Victim Impact Statements for inclusion in the pre-sentence report.

On September 4, 2007, the Flavor and Extract Manufacturers Association recommended reduction of diacetyl in butter-like flavorings, such as those used in popcorn, due to cases of the potentially fatal disease bronchiolitis obliterans or "Popcorn Workers's Lung" appearing among plant workers exposed to diacetyl fumes, as well as in one case that involved a popcorn consumer. The next day ConAgra Foods announced that it would soon remove diacetyl from its Jiffy Pop and Orville Redenbacher's popcorn products.

On October 11, 2007, Conagra asked stores to pull the Banquet and generic brand chicken and turkey pot pies due to 152 cases of Salmonella poisoning in 31 states being linked to the consumption of Conagra pot pies, with 20 people hospitalized. At that time, both the USDA and Conagra decided in favor of a consumer advisory and against a recall. ConAgra said the issue stemmed from pies not being cooked thoroughly in older microwaves, and that the package's heating instructions would be changed to reflect different microwaves. However, the plant in Marshall, Missouri, where the pot pies were manufactured closed on October 11 as well. By October 12, a full recall was announced, affecting all varieties of frozen pot pies sold under the brands Banquet, Albertson's, Food Lion, Great Value, Hill Country Fare, Kirkwood, Kroger, Meijer, and Western Family. The recalled pot pies included all varieties in 7-oz. single-serving packages bearing the number P-9 or "Est. 1059" printed on the side of the package. By October 14, 174 cases of Salmonella poisoning in 32 states were linked to consumption of the contaminated ConAgra pot pies, with 33 people hospitalized. Public interest groups criticized Conagra for the delay in issuing the recall, a decision which Conagra defended by saying the recall was a precaution. At the time of the recall, the USDA had still not identified the source of the salmonella contamination. On October 17, the Colorado Department of Public Health reported that "An investigation by the Centers for Disease Control and Prevention and state public health departments involved a large cluster of illnesses caused by Salmonella that identified these products" and stated that, "Nationally, at least 211 individuals from 35 states have become ill." From January 1 through December 31, 2007, the CDC identified a total of 401 cases in 41 states. 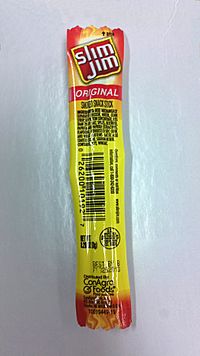 On June 9, 2009 at 11:27 am ET, an explosion rocked the Slim Jim manufacturing plant in Garner, North Carolina resulting in the collapse of a section of the facility's roof and wall. Four workers were killed while 67 others – including three firefighters – were hospitalized for burns and exposure to ammonia gases. The explosion happened when natural gas was purged into the interior of the building during commissioning of a new, gas-fired water heater. This explosion was directly responsible for an amendment to the National Fuel Gas Code prohibiting fuel gas piping systems in large buildings from being purged indoors.

On March 3, 2010, ConAgra announced that the Garner plant would close in approximately 18 months, and Slim Jim production would be moved to a plant located in Troy, Ohio.

All content from Kiddle encyclopedia articles (including the article images and facts) can be freely used under Attribution-ShareAlike license, unless stated otherwise. Cite this article:
ConAgra Foods, Inc. Facts for Kids. Kiddle Encyclopedia.