Cooper Landing is a census-designated place (CDP) in Kenai Peninsula Borough, Alaska, United States, about 100 miles (160 km) south of Anchorage, at the outlet of Kenai Lake into the Kenai River. The town was first settled in the 19th century by gold and mineral prospectors, and has become a popular summer tourist destination thanks to its scenic location and proximity to the salmon fishery of the Kenai River and Russian River. As of the 2010 census, the population in Cooper Landing was 289, down from 369 in 2000.

Cooper Landing was named for Joseph Cooper, a miner who discovered gold there in 1884. However, Peter Doroshin, a Russian engineer, had identified gold prospects as far back as 1848 when the territory was still part of Russian America.

Cooper Creek was first recorded in 1898 by the U.S. Geological Survey. In 1900, the Census found 21 miners and 1 wife living at Cooper Creek. The Riddiford Post Office began operations in 1924, and the Riddiford School opened in 1928.

In 1946, Pat and Helen Gwin arrived in Cooper Landing which had about 100 residents then. The Gwins eked out a living by operating a small packaged goods store out of a tent. That same year, construction began on the highway from Cooper Landing to Homer. The Sterling Highway, the road that is the artery of the Kenai Peninsula, opened in 1950 and subsequently the Seward Highway opened in 1951. Gwin's Lodge was built from spruce logs harvested from the surrounding Chugach National Forest. Cutting, hauling and hand-peeling the logs, Pat and Helen Gwin completed and opened the lodge on January 1, 1952. Pat and Helen parted ways in 1959, but Helen stayed to run the lodge and retired in 1976. The historic Gwin's Lodge is one of the oldest log roadhouses in Alaska and is still in operation today.

The Cooper Landing Post Office is the oldest building in the area that is still used and is listed on the National Register of Historic Places. 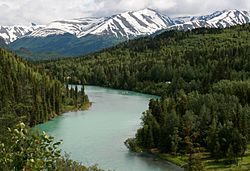 Cooper Landing first appeared on the 1950 U.S. Census as an unincorporated village. It was made a census-designated place (CDP) in 1980.

The "Spirit of the Kenai" operates as a charter out of Cooper Landing.

There were 162 households, out of which 21.6% had children under the age of 18 living with them, 50.6% were married couples living together, 4.3% had a female householder with no husband present, and 40.7% were non-families. 34.0% of all households were made up of individuals, and 9.9% had someone living alone who was 65 years of age or older. The average household size was 2.14 and the average family size was 2.74.

All content from Kiddle encyclopedia articles (including the article images and facts) can be freely used under Attribution-ShareAlike license, unless stated otherwise. Cite this article:
Cooper Landing, Alaska Facts for Kids. Kiddle Encyclopedia.