Cotati /koʊˈtɑːtiː/ is an incorporated city in Sonoma County, California, U.S., located about 45 mi (70 km) north of San Francisco in the 101 corridor between Rohnert Park and Petaluma.

Cotati's population as of the 2010 Census was 7,265, making it the smallest incorporated community in Sonoma County.

Like all of Sonoma County, Cotati is included in both the San Francisco Bay Area and the Redwood Empire. Located in the Sonoma Coast AVA, Cotati can also be considered part of the Wine Country. E & J Gallo Winery operates a 400-acre (160 ha) vineyard called Two Rock Vineyard in the hills west of town.

Cotati's hexagonal downtown plaza, one of only two hexagonal town layouts in the United States, is California Historical Landmark number 879. The other U.S. city with a hexagonal layout is Detroit, Michigan.

The city is about 17 mi (27 km) from the Pacific Ocean. It lies entirely in the drainage basin of the Laguna de Santa Rosa. The Petaluma River watershed begins just south of town. To the west is the Stemple Creek watershed. The sources of all three watercourses lie in the hilly area between Stony Point Road and U.S. 101, just west of town.

A gap in the coastal ridges near Petaluma often allows coastal fog to reach Cotati in the summer, giving it a marine climate that is noticeably cooler and less sunny than the "coastal" climates of nearby Santa Rosa and Sebastopol. Cotati averages fewer than 800 hours per growing season in the 70–90 °F (21–32 °C) range.

The soils of the Cotati area are characterized by recent alluvial materials, explicitly those areas bordering the Laguna de Santa Rosa and its tributary Washoe Creek. These materials are largely stream and valley alluvium, with artificial fill in some areas.

Active faults near Cotati include the Rodgers Creek Fault (5 mi or 8 km east) and the Tolay Fault.

To the west of Cotati are wetland habitat for Sebastopol meadowfoam, Pitkin Marsh lily, Showy Indian clover and several other endangered species.

The Census reported that 99.9% of the population lived in households and 0.1% lived in non-institutionalized group quarters.

There were 2,532 households out of which 35.3% had children under the age of 18 living with them, 44.8% were married couples living together, 13.1% had a female householder with no husband present, and 36.5% were non-families. 23.9% of all households were made up of individuals and 5.4% had someone living alone who was 65 years of age or older. The average household size was 2.55 and the average family size was 3.05.

In 1827, an Irishman named John Thomas Reed ventured into Miwok territory and built a cabin near Crane Creek. After the natives burned it, he retreated south to Mill Valley.

In July 1844, the Mexican government granted Rancho Cotate (encompassing present-day towns of Cotati, Penngrove and Rohnert Park, and home to Coast Miwok people) to Captain Juan Castaneda, a Mexican military commander from Texas, in payment for his service as a soldier under General Vallejo. The grant took its name from the Coast Miwok village of Kotati. However, a legend arose that Rancho Cotate was named after a Pomo chief named Cotati, and in 1973 the state perpetuated this legend on the historical marker it placed in the plaza.

Rancho Cotate consisted of 17,238.6 acres (6,976.2 ha). Captain Castaneda moved to San Francisco and never developed Rancho Cotate. Because he failed to fulfill the legal requirements of the grant, he lost control of the rancho, which passed to Thomas Larkin and then to Joseph Ruckle. In 1849, Ruckle sold the land to Dr. Thomas Stokes Page, a former resident of Valparaíso, Chile, for $1600. Rancho Cotate was recorded in California state records as follows:

{{Quotation|"Cotate The land holding remained in the Page family for over eighty years. Subject to seasonal flooding from the Laguna de Santa Rosa, the land was used to graze cattle and sheep. In October 1870, the San Francisco and North Pacific Railroad completed the first railroad from Petaluma to Santa Rosa, and a town formed around the wood and water stop called Page's Station, then Cotati.

Development of a town 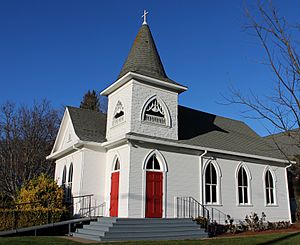 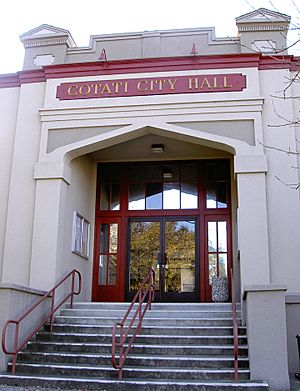 Cotati's hexagonal plaza and street grid plan was designed during the 1890s by Newton Smyth as an alternative to the traditional grid. Dr. Thomas Page's barn once stood where the plaza is today, and each of the streets surrounding the plaza is named after one of his sons. In 1892, the Page family created the Cotati Land Company to subdivide their ranch into parcels of five to twenty acres (two to eight hectares). By 1901, good land was selling for $30 to $60 per acre. Page family ownership ended in 1944.

The Northwestern Pacific Railroad built the Cotati Depot in 1907. It was located near the East Cotati Avenue crossing, almost 1 mi (1.6 km) east of the plaza. It was demolished to make way for Cotati's Sonoma-Marin Area Rail Transit station.

Prior to 1915, the major north-south roads (Petaluma Hill Road and Stony Point Road) bypassed Cotati. In that year, the state routed the Redwood Highway (part of U.S. Route 101) onto the mostly-unpaved Cotati Boulevard. U.S. 101 passed through the downtown plaza until 1955, when the highway was re-routed further west. U.S. 101 still bisects Cotati, and the former route is called Old Redwood Highway.

In February 1921, the old schoolhouse at 201 West Sierra burned down. A new school built on the same site opened in 1922. This building has served as City Hall since 1971. The rear of this building housed the Cotati Police Department until September 3, 2003 when the department moved into a new building next door.

The Cotati Speedway, a wooden oval track for automobile racing, was built near the depot around 1921. It was about 1.25 mi (2 km) in circumference. World records were set there, but it failed in its first season and was torn down in 1922.

In 1927, the Cotati Volunteer Fire Department was organized. Since 1993, Cotati has been part of the Rancho Adobe Fire Protection District.

A local weekly newspaper called The Cotatian was established by E. A. Little in 1944 and lasted until 1964. The current local paper is The Community Voice, published in neighboring Penngrove.

On July 2, 1963, less than a year after the incorporation of the lands north of town to form Rohnert Park, voters approved (by a 284 to 41 margin) incorporation of Cotati as a separate city. After incorporation, the city grew rapidly, due in part to being within commuting range of San Francisco. Between 1965 and 2000, the population increased by more than a factor of four.

In 1979, Cotati voters approved a rent control ordinance for all residential rentals, but in 1995, that ordinance was partly preempted by the passage of AB (Assembly Bill) 1164, known as the Costa/Hawkins Bill. At the time, Cotati was one of five cities in California with "strong rent control" laws which included vacancy control. (The other cities were West Hollywood, Santa Monica, Berkeley and East Palo Alto). The Costa/Hawkins bill made it impossible for California municipalities to enforce vacancy control, except in special cases like mobile home parks. When the 1979 ordinance was repealed by Cotati voters in 1998, it was replaced with a more limited ordinance aimed at mobile home parks. At the present time, eight of the nine incorporated areas in Sonoma County have rent control for mobile home parks, the exception being Healdsburg.

In order to cope with declining revenue, the City instituted a series of budget cuts, starting in 2007. As of August 2009, the City expected to run out of money in its General Fund within a year.

The Cotati Chamber of Commerce is a business organization that promotes economic prosperity within the City of Cotati through economic development services, business services and community events. The chamber is a nonprofit 501(c)(6) organization funded by membership dues, fundraising projects and donations.

From the south, U.S. Route 101 North and State Route 116 West approach Cotati on a multilane lane freeway alignment which Caltrans calls the Cotati Grade, with exits at Railroad Avenue and West Sierra Avenue. From the west, State Route 116 East approaches on the two-lane Gravenstein Highway. From the north, U.S. Route 101 South approaches Cotati as a multilane freeway with a single exit at Gravenstein Highway.

All content from Kiddle encyclopedia articles (including the article images and facts) can be freely used under Attribution-ShareAlike license, unless stated otherwise. Cite this article:
Cotati, California Facts for Kids. Kiddle Encyclopedia.