Penngrove is a census-designated place (CDP) in Sonoma County, California, United States, situated between the cities of Petaluma and Cotati, at the foot of Sonoma Mountain. It is part of the North Bay subregion of the San Francisco Bay Area. The population was 2,522 at the 2010 census.

The site of a historic grove called Penn's Grove, it was formerly a freight station on the Northwestern Pacific Railroad and a center of egg and chicken farming.

Lichau Creek flows southward through the town, paralleling the railway. The creek feeds into the Petaluma River, which flows to San Pablo Bay.

Due to the Sonoma Mountain's ancient volcanism, Penngrove is rich with obsidian and petrified wood. Its soil is unique, composed mainly of clay-like adobe, which has been used for centuries as building material. A prime example of adobe architecture is the Rancho Petaluma Adobe, a State Historic Park in nearby Petaluma.

According to the United States Census Bureau, the CDP covers an area of 4.0 square miles (10.4 km²), all of it land.

The Census reported that 99.6% of the population lived in households and 0.4% lived in non-institutionalized group quarters.

Originally home of the Coast Miwok native people, the Mexican government granted Rancho Cotate to Captain Juan Castaneda in July 1844 for his military services in the region. The grant encompassed present-day Penngrove, Cotati and Rohnert Park. Cotate Rancho is a part of Vallejo Township which encompasses the plain between Sonoma Mountain and Petaluma Creek, San Pablo Bay, with an east-west line dividing the tract from Santa Rosa Township."

Rancho Cotate was sold in 1849 to Dr. Thomas S. Page, of Cotati, and eventually broken up and sold off piecemeal to incoming settlers.

The first European settlers in the Penngrove area were David Wharff, W.J. Hardin, and J.M. Palmer who arrived in 1852.

In October 1870, the San Francisco and North Pacific Railroad completed the first railroad from Petaluma to Santa Rosa, running through Penngrove.

Every summer on the Sunday closest to July 4, Penngrove celebrates the 4th of July with a parade sponsored by the Penngrove Social Fireman. On Saturday at the Penngrove Fire Station, located at the corner of Main Street and Old Redwood Highway, the Rancho Adobe Firefighters Association sponsors a breakfast.

The naming of Penngrove is uncertain; there are three main "histories" of the name's origin.

Ruth Anderson, the famous "Bell-Lady" of Penngrove (who lived on the site of the old schoolhouse on Oak Street), recalls, "In the late 1860s, two brothers by the name of Penn came out from Pennsylvania and bought 80 acres (320,000 m2) of land in this area. They planted the area with olive trees, but when the trees matured it was found that the olives were not edible. The Penn brothers tore out many of the groves, sold the land and moved away. However, while they were here, they named their place Penn's Grove. Later it was changed to Penn grove, and still later, because our mail got confused with that of Pine Grove (the former name of Sebastopol), the U.S. Postoffice Department changed the name to one word—Penngrove." (Harris 1980)

Other accounts state that there was another town with the name of Penn's Grove in New Jersey, which is why the Postoffice changed the name. Others claim that the Woodward family, who came from Pennsylvania, named their property Penn's Grove in honor of their home state.

One of the oldest buildings in Penngrove, the old Methodist Episcopal Church was built in 1898 at the corner of Formschlag Lane and Petaluma Hill Road. In 1910, the church was moved on wooden rollers to its present location at 9970 Oak Street. The original building now serves as a fellowship hall, while a newer structure, built in 1955-7, now serves as the main sanctuary. The original structure is still used by Girl Scouts of the USA, Boy Scouts of America, 4-H, and various other community organizations.

The first classes were taught in a small building on Peters' Ranch (Harris 1980: 33). In 1876, the first school was built at the southwest corner of Adobe Road and Main Street. It was named the Eagle School after the Eagle Hotel located across Main Street and shown on Thompson's map of Sonoma County (1877). In 1906 after construction of the second Eagle School, the old school was used as a teacher's residence. It was later moved about 50 ft (15 m) south to its current location and reconfigured into an ell. The second Eagle School was built between Main and Oak streets. The original structure no longer exists, and a private home now stands on that property, however, the steps leading to "Eagle School" from Main Street are still visible. Some of building materials were recycled for construction of the Community Center and a small building in Penngrove Park. In 1926 a beautiful mission-style school house was built and named Penngrove School, Eagle District. Penngrove School joined the Petaluma City School District in 1962. In 1963, the present Multi-purpose room was constructed and newer wings were developed between it and the older portion of the school. The Multi-purpose room was expanded with a stage in 2006. The 1926 school building is now primarily used for offices and the school library.

"The Post Office at Penn's Grove was established on October 30, 1882. A series of name changes occurred because of mail mix-ups with Penn's Grove, New Jersey and Pine Grove (later renamed Sebastopol). In May 1895 the Petaluma paper reported: 'The Penngrove Post Office has had its name changed again and is now officially known by its former and best known title, Penn's Grove.' In 1908 the name was changed back to Penngrove and has remained so since" (Harris 1980). The first Post Office was located in the Edwards Building and was then moved into the Terribilini Building on the East side of Main Street. It was then moved next to Penngrove Market and a new structure for the Post Office was built in the 1980s on Main Street across from Penngrove Market.

At the turn of the century, three fire chemical carts served as Penngrove's fire protection. The foundation of Firehouse 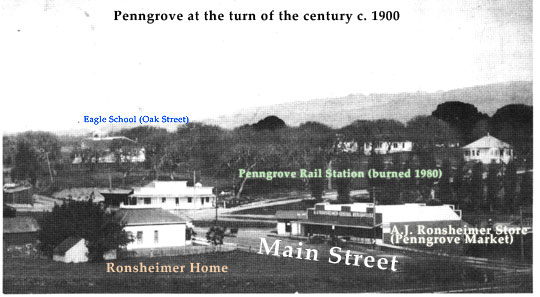 "During World War I, a group of Penngrove ladies met in Evart's Hall to do Red Cross work. After the war they decided they wanted to stay together as a group and have a club house of their own" (Harris 1980: 33). In 1922, after raising funds and materials, Penngrove came together to build the Community Club House. The total cost was $9000. The building was first named the "Penngrove Social Welfare Club House", but was later shortened to Penngrove Women's Club House. After a fire destroyed portions of the building in the late 1970s and the Women's Club could no longer afford the upkeep, the Penngrove Social Firemen bought the building. It is now used for various community events, such as voting and fund raisers.

"The Bank Building was built in 1922 for the Central Commercial and Savings Bank. The bank lasted only 2 or 3 years. The bank manager and his family lived upstairs" (Harris 1980: 48).

The Penngrove Rail Station burned to the ground in 1980, and nothing of it survives. The poultry loading docks still exist behind Penngrove Market, adjacent to Penngrove Park, and now house businesses.

All content from Kiddle encyclopedia articles (including the article images and facts) can be freely used under Attribution-ShareAlike license, unless stated otherwise. Cite this article:
Penngrove, California Facts for Kids. Kiddle Encyclopedia.