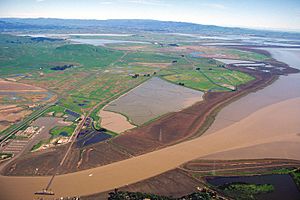 The mouth of the Petaluma River on San Pablo Bay. View is to the northeast.

The Petaluma River is a river in the California counties of Sonoma and Marin that becomes a tidal slough for most of its length. The headwaters are in the area southwest of Cotati. The flow is generally southward through Petaluma's old town, where the waterway becomes navigable, and then flows another 10 mi (16 km) through tidal marshes before emptying into the northwest corner of San Pablo Bay.

The word Petaluma may derive from the Miwok words pe’ta, flat, and luma, back. The Miwok people lived in Sonoma County for more than 2500 years. Petaluma was the name of a village on a low hill east of Petaluma creek and north east of the present day town of Petaluma. The first recorded exploration of the Petaluma River was by Captain Fernando Quiros in October, 1776. While other members of his Spanish expedition collected adobe and timber for the new Presidio of San Francisco and for the Mission San Francisco de Asís (Mission Dolores), Quiros and his sailors tried unsuccessfully to sail from San Pablo Bay to Bodega Bay.

Located in southern Sonoma County, California, and a portion of northeastern Marin, the Petaluma River Watershed drains 146 square miles (380 km2). The watershed is approximately 19 miles (31 km) long and 13 miles (21 km) wide with the City of Petaluma near its center. At 2,295 feet (700 m), Sonoma Mountain is the highest point in the watershed, and its western slopes drain to the Petaluma River by way of tributaries such as Lichau Creek, Lynch Creek, Washington Creek, and Adobe Creek. The lower 12 miles (19 km) of the Petaluma River flow through the Petaluma Marsh, the largest remaining salt marsh in San Pablo Bay. The marsh covers 5,000 acres (20 km2) and is surrounded by approximately 7,000 acres (28 km2) of reclaimed wetlands. In the marshes west of Lakeville, the river is joined by San Antonio Creek, at which point it becomes the boundary between Marin County and Sonoma County. The river flows under State Route 37 at Green Point and enters northwest San Pablo Bay just north of Petaluma Point.

While the river's source lies over 300 ft (100 m) above sea level, it descends to 50 ft (15 m) within about 0.4 mi (600 m). The river is fully tidal 11 mi (18 km) from its mouth, indicating its slight gradient through the marshes below Petaluma. The United States Army Corps of Engineers dredges this section to keep it navigable by gravel barges and pleasure craft. 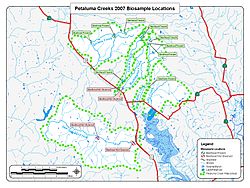 Steelhead (Oncorhyncus mykiss) that spawn and rear in the Petaluma River watershed are wild, not hatchery, stock. Chinook salmon (Oncorhynchus tshawytscha) are seen in the main stem of the Petaluma River and The United Anglers of Casa Grande High School have seen chinook at the turning basin, near the Lynch Creek confluence. The high school students constructed a salmonid hatchery in 1993 and in 2002 74 Chinook salmon returned to spawn in the Adobe Creek tributary.

The marshes provide an important wildlife habitat and fish hatchery. However, since the onset of intensive immigration in the mid-1850s, the water quality has diminished, partly due to overgrazing and other agricultural uses. Pollutants present in the river include nitrates, phosphates, petroleum hydrocarbons, pesticides and sediment. Urban runoff, particularly from the City of Petaluma, adds heavy metals and hydrocarbons to the river. Starting about 1990, material steps were taken to mitigate the pollution.

Because the Petaluma River is relatively well-protected, most of the pollution comes from nearby storm drains. It is up to the people of Petaluma to keep the river clean.

Because most of the length of the waterway is tidal and urban/suburban, there is a significant collection of tidally deposited debris along the banks. Despite the poor aesthetics including turbidity, the water quality is not particularly poor.

It has been alleged that the greatest threat to the Petaluma River is the planned Dutra asphalt plant. The reported concerns involve the "loud noises it will create" that will scare away the birds and "throw off the entire ecosystem".

The Petaluma Blvd South Interchange project will construct a new interchange at Petaluma Blvd South, frontage roads and replace the Petaluma River bridge. The existing Petaluma River bridge is an 866 feet long, twin reinforced concrete box girder (with pre-cast I girder span over the river) bridge that was built in 1955. The existing bridge has two lanes of traffic in each direction and no shoulders The new bridge will be 907 feet long with three lanes of traffic in each direction and standard shoulders. This will be one of the longest precast, post-tensioned spliced concrete girder bridges in the U.S. Constructing the new bridge over the Petaluma River, which is a navigation channel, will be very challenging. The bridge will be constructed in three stages and require erection of 99 girders up to 130 feet in length and weighing up to 60 tons each.

The project will also replace the existing South Petaluma Blvd On/Off Ramps constructed underneath Highway 101 in the mid 1950s with a new "diamond" interchange with a decorative gateway structure (overcrossing).

Construction is anticipated to be complete by the end of in 2016.

All content from Kiddle encyclopedia articles (including the article images and facts) can be freely used under Attribution-ShareAlike license, unless stated otherwise. Cite this article:
Petaluma River Facts for Kids. Kiddle Encyclopedia.