Cotter is a city in Baxter County, Arkansas, United States. The population was 1,078 at the 2010 census. 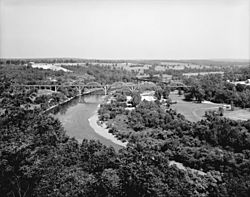 The Cotter Bridge was critical in the development of The Ozarks.

Native American Bluff Dwellers were the original inhabitants of the area now known as Cotter. When Native Americans were moved westward on the Trail of Tears, Approximately 1000Cherokees crossed just a short distance upriver from the current location of Downtown Cotter.

In 1819, Henry Schoolcraft was exploring the Ozarks and spent a night in the Cotter area. He said of the area,

White River is one of the most beautiful and enchanting streams, and by far the most transparent, which discharge their waters into the Mississippi ... We here behold the assembled tributaries flowing in a smooth, broad. deep, and majestic current ... skirted at a short distance by mountains of the most imposing grandeur.... [The] extreme limpidity and want of colour ... was early seized upon by the French traders on first visiting this stream, in calling it "La Rivière Blanche" (White River).

Future President, Herbert Hoover, spent the summer of 1892 helping Geologist John C. Branner survey the Northern Ozarks. By the early 1900s, there were many mining companies active in both Baxter, and Marion Counties. Cotter quickly became a central point where minerals could be shipped via Steamboat to much larger cities in Central Arkansas or Southern Missouri.

Originally, the river bend was known as either Lake's Ferry or Lake's Landing. At this spot, the White River turns sharply, making a convenient border for a town. The Spring that rises up from the caves beneath Cotter, also added to the appeal to early settlers. Lake's Ferry was known as one of the most beautiful spots on the river and was appreciated by locals and tourists.

Looking to capitalize on the growing trade in the area, the Missouri-Pacific Railroad announced plans to open the White River Line which would run through the area and would connect with the main line in Lake's Landing. By 1902, the Cotter post office had opened. 2 years later, the first school in Cotter opened. In 1905, the Missouri Pacific Railroad bought the area and sold over one thousand lots, mostly to railroad employees. The city was incorporated in 1905 as Cotter, Arkansas. By that time the population was over 600. The town was named after William Cotter, an official for the Missouri Pacific Railway System, which built a line through the small town. The materials required to build the town and railroad had to be brought in by Steamboats down the White River. Once the Railroad was completed, the use of Steamboats on the rivers of Arkansas decreased and eventually stopped altogether. In 1906, the first passenger train arrived, and the Tourist era began.

The mercurial White River caused many motorists problems, as the nearest crossing was over 100 miles (160 km) to the north in Branson, Missouri. An inconvenient ferry system made the need for a bridge apparent. Locals wanted a bridge, but they strongly opposed a toll bridge. Arkansas did not have a central highway body at the time, and was instead a patchwork of "road districts", which made the bridge-building efforts even more difficult. Without a toll, funding wasn't available until Arkansas Highway 12 was redesignated U.S. Route 62 in 1930. The Cotter Bridge was constructed through the area using a unique rainbow arch design.

According to the United States Census Bureau, the city has a total area of 2.5 square miles (6.5 km2), all of it land.

Mountain Home has one local railroad, the Missouri and Northern Arkansas Railroad. The MNA leases the track from Newport Arkansas to Kansas City Missouri, from the Union Pacific Railroad. The regular train traffic are empty coal trains from The Independence power plant, as well as a north and south local out of Cotter.

There were 545 households out of which 20.8% had children under the age of 18 living with them, 48.5% were married couples living together, 8.6% had a female householder with no husband present, and 40.0% were non-families. 35.4% of all households were made up of individuals and 16.7% had someone living alone who was 65 years of age or older. The average household size was 2.08 and the average family size was 2.67.

All content from Kiddle encyclopedia articles (including the article images and facts) can be freely used under Attribution-ShareAlike license, unless stated otherwise. Cite this article:
Cotter, Arkansas Facts for Kids. Kiddle Encyclopedia.