Baxter County is a county in the U.S. state of Arkansas. As of the 2010 census, the county's population was 41,513. The county seat is Mountain Home. It is Arkansas's 66th county, formed on March 24, 1873, and named for Elisha Baxter, the tenth governor of Arkansas.

The Mountain Home, AR, Micropolitan Statistical Area includes all of Baxter County. It is in the northern part of the state, bordering Missouri. It is commonly referred to as the Twin Lakes Area because it is bordered by two of Arkansas' largest lakes, Bull Shoals Lake and Norfork Lake. On its southern border is the Norfork Tailwater and the Buffalo National River.

Mountain Home, a small town whose origins date back to the early nineteenth century, is located in north-central Arkansas on a plateau in the Ozark Mountains. The natural beauty of nearby Norfork and Bull Shoals lakes and the surrounding countryside has attracted tourists from around the country for many years. In addition, educational institutions have always played a prominent role in the life of the community.

The Baxter Bulletin weekly newspaper was named in 1973 by the Newspaper Enterprise Association as the "Best Overall Weekly Newspaper in the United States" in the over 10,000-circulation category. At the time it was published by Harold E. Martin and was the largest weekly paper in Arkansas. 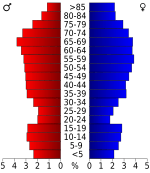 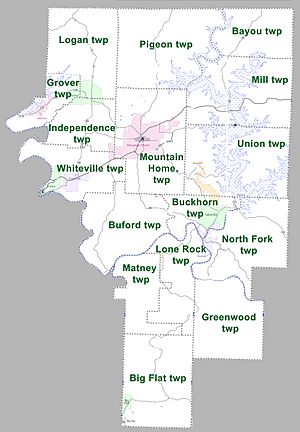 Townships in Baxter County, Arkansas, as of 2010

Townships in Arkansas are the divisions of a county. Each township includes unincorporated areas; some may have incorporated cities or towns within part of their boundaries. Arkansas townships have limited purposes in modern times. However, the United States Census does list Arkansas population based on townships (sometimes referred to as "county subdivisions" or "minor civil divisions"). Townships are also of value for historical purposes in terms of genealogical research. Each town or city is within one or more townships in an Arkansas county based on census maps and publications. The townships of Baxter County are listed below; listed in parentheses are the cities, towns, and/or census-designated places that are fully or partially inside the township.

All content from Kiddle encyclopedia articles (including the article images and facts) can be freely used under Attribution-ShareAlike license, unless stated otherwise. Cite this article:
Baxter County, Arkansas Facts for Kids. Kiddle Encyclopedia.